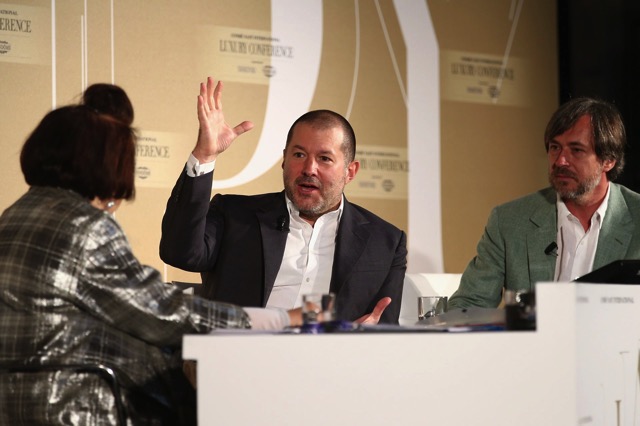 The Apple Watch will “officially” launch only this Friday, but there has been much buzz around it ever since Tim Cook presented it last September. We’ve heard Jony Ive talking about how the Apple Watch is made and the profound attention to detail every millimetre of the device got during the creation and manufacturing process. But how does Apple’s 21st century luxury compare to traditional luxury as we know it? Jony Ive and friend designer Marc Newson explain to Suzy Menkes at the Condé Nast International Luxury Conference.

“When we started on the iPhone it was because we all couldn’t bear our phones. The watch was different. We all loved our watches, but saw that the wrist was a fabulous place for technology, so there were different motivations. I don’t know how we can compare the old watches we know, with the functionality and the capability of the Apple Watch.”

Apple is well placed to market its latest gadget: it is the company behind the most sought-after smartphone, the iPhone. To create the Apple Watch, Ive used what he has learned from the iPhone.

“One of the things that we have learnt through the iPhone is that there are fundamental things that people use all of the time. And what we’ve been struck by is that people use it for different reasons. With the watch it is the first time that we can assume someone has something intimately connected with them for most of the day – you can’t do that with the phone, so it opens up new ways of communication.”

Ive explains his friendship with Marc Newson started and what inspires both of them:

“One of the reasons we became friends very quickly all those years ago, is that we perceived the world in a very similar way,” added Ive. “It’s nice that the conversation started and we sat down together and began to draw, and sculpt prototypes. I’m not one of those people that finds technology isolation seductive – I’m excited about what it can do.”

The whole interview is worth reading on Vogue.