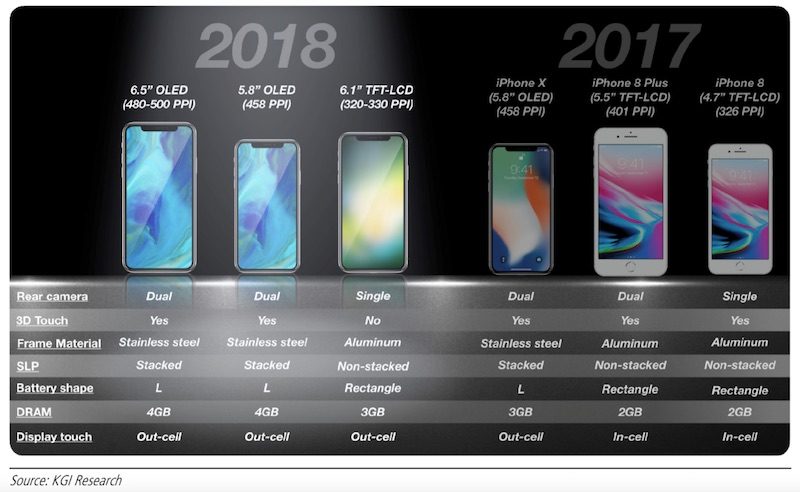 According to new shipment projections from the prolific Ming-Chi Kuo of KGI Securities (via MacRumors), the Cupertino company will ship a staggering 100 million unit in the second half of this year, adding to expectations that the rumoured 6.1-inch LCD iPhone will be a massive success.

“We project shipments under the new product life cycle (4Q18-3Q19) for the 6.1″ LCD iPhone, estimated to be launched in 2H18, will reach around 100mn units,” reads Kuo’s projection.

The new LCD model will likely feature Face ID “but design compromises will enable Apple to put it at a more affordable price point.” To do so, Apple could launch the model with an aluminum frame, a single lens camera, and without 3D Touch.

Kuo believes share pullbacks of the LCD supply chain over the trailing year have priced in concerns about growing OLED competition. Further, if Apple does release a 6.1-inch LCD iPhone model with full-screen display, as the rumours suggest, the potential for sales growth will positively affect suppliers like LCD manufacturer Japan Display.

In short, there’s reason to believe that Apple later this year will shatter all existing iPhone records, both in terms of overall sales and revenue as the 6.1-inch iPhone will effectively be an iPhone X-style device priced like an iPhone 8.

In the revised reported, Kuo says Apple will introduce three new iPhones this fall. Including the 6.1-inch LCD model, the company’s expected to launch two OLED handsets, a second-generation 5.8-inch iPhone X and a larger 6.5-inch model, the so-called “iPhone X Plus.”