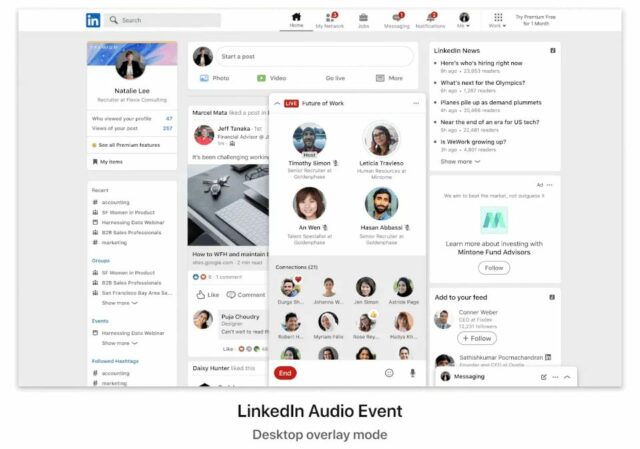 According to TechCrunch, professional networking and career development platform LinkedIn has announced a new ‘live events’ feature that will list, host, and market interactive, virtual events for users.

The first of this new feature’s offerings will be an audio-only product similar to the audio-focused chat app Clubhouse, slated to launch later this month to beta testers. Audio-only live events will initially tap LinkedIn Creators for organizers and hosts, and a video version is planned for a launch later this spring.

Virtual events have really taken off amidst the COVID-19 pandemic. People all over the world being forced to stay home was a pretty big contributor to Clubhouse’s success, and that was something every leading social media platform wanted to cash in on.

Facebook came out with Live Audio Rooms and Twitter started rolling out Spaces, and now LinkedIn wants a piece of the action.

LinkedIn has found itself a neat little niche with professional social experiences, and it’ll be interesting to see how the platform will integrate all-virtual events (on top of its existing LinkedIn Live broadcast product) to take things to the next level.

The company says its implementation of the audio-only format will be a rather open one, designed to give users maximum control over the events they run.

“Our philosophy is to put the organizers in control,” said LinkedIn Product Manager Jake Poses in an interview.

“We want to make it easier to host virtual round tables, fireside chats, and more. Some may want the event to be more formal, or less formal. Some might want to communicate with their audience, to open up to the floor. We’re giving professionals interactivity and support.”

The events platform will launch later this month with all the tools users will need to run interactive content end-to-end. Hosts will be able to record and run evens directly from LinkedIn without the need for any third-party software.

In addition, the platform will include tools for online attendees and hosts to speak to each other in live conversations, for organizers to moderate discussions, and for attendees to communicate with each other both during and after events take place. Events running on the platform will also be listed and marketed by LinkedIn.

LinkedIn has also been testing a paid, ticketed option for its events platform since late last year, but Poses confirmed that interactive events will launch as a free service and the company does not have any plans for ticketing at this point.

As part of its continuing production diversification initiative, Apple has ordered for a portion of its AirPods and Beats headphones to be manufactured in India. Apple has begun to double down on manufacturing its devices in India. As a way to lower its dependence on China, Apple has made an order to its suppliers to...
Steve Vegvari
35 mins ago