Back in June, after TD Canada launched support for Apple Pay, their subsidiary MBNA Canada said they were “working hard” to also bring support for the iPhone mobile wallet.

MBNA Canada has now provided another update, informing customers on Twitter they’re “excited”, but “need 2 finalize the details”, when asked about Apple Pay. They also noted the “service is going 2 be coming soon”: 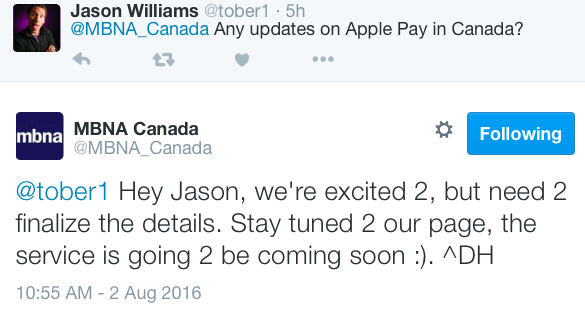 The credit card issuer also explained in other tweets they wanted “2 make sure the service meets our standards”, so they are “taking time to get it right”. In the meantime, customers are being told to “stay tuned 2 our page” (is their social media team run by 10 year olds?).