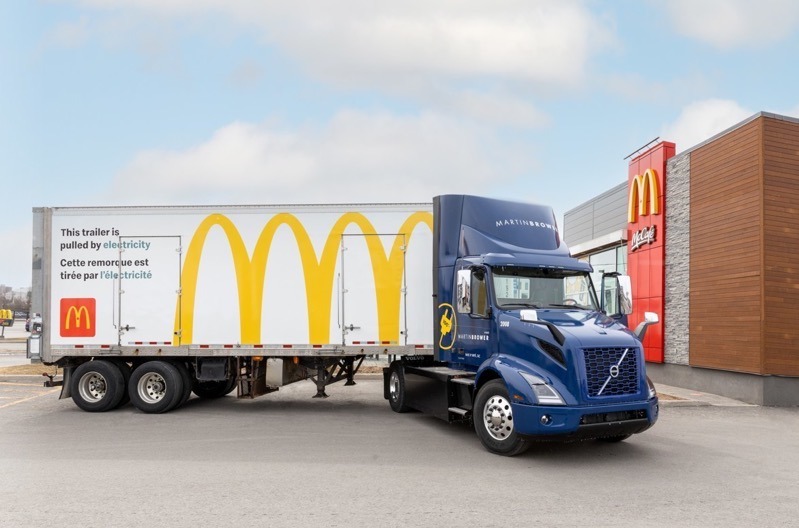 McDonald’s Canada on Wednesday announced the addition of the first-ever electric vehicle (EV) to its distribution fleet — reports Tesla North.

The fast-food giant debuted an all-electric Volvo VNR Electric Class 8 semi-truck in Montréal, Québec, to distribute supplies across its restaurants in the area.

The Volvo VNR was leased by McDonald’s Canada’s supply chain distribution partner, Martin Brower, and it will be based out of its distribution centre in Montréal’s Baie d’Urfé area. The all-electric semi will pull McDonald’s-branded trailers to local restaurants within a 150 km (93 miles) radius.

According to McDonald’s Canada, the deployment will serve as a pilot test and is part of the restaurant chain’s larger plan to transition to lower-emission vehicles for the entirety of its distribution fleet in the country, which serves over 1,400 restaurants, “where feasible.”

McDonald’s Canada is particularly interested in testing the electric semi’s performance in various weather conditions. Winters in Montréal can get quite cold, which will likely have an impact on the Volvo VNR’s range.

“This trial has the potential to influence a major shift in the way we approach supply chain distribution that will bring us closer to reaching McDonald’s net zero emissions goals,” said Jacques Mignault, President and CEO of McDonald’s Canada, in a statement.

“Considering the potential impact the trial could have on our business and our reduction commitments, this is an extremely significant moment for the company.”

The fast-food giant says it plans to achieve net-zero emissions for its operations across the globe by 2050.

“We’re grateful to collaborate with partners like Martin Brower and Volvo Trucks North America who share our vision, and acknowledge the support from the Québec government on this initiative,” added Mignault.

Of course, the Volvo VNR isn’t the only option businesses have for all-electric supply chain distribution. Walmart Canada, for example, has tripled down on its orders of the Tesla Semi.

McDonald’s Canada will also trial the electric Volvo VNR in Brampton, Ontario, later this year. Back in November of last year, the fast-food chain switched to the ‘MyMcDonald’s Rewards’ points program in Canada.

With mere weeks remaining in Ian Scott's term as chairman of the Canadian Radio-television and Telecommunications Commission (CRTC), one telecom expert has said his tenure has proven "disastrous for public confidence" in the regulator. "I think it’s been disastrous for public confidence at the CRTC at the very time that the government wants to hand...
Nehal Malik
58 mins ago