Microsoft Has Lost $1.7 Billion on its Surface Tablet in Two Years

Microsoft’s Surface tablet debuted in 2012 and has long been touted as a potential iPad rival, but the numbers tell a different story. According to ComputerWorld, their estimates based on Microsoft’s 8-K and 10-K SEC filings show the company has lost roughly $1.7 billion to date on the Surface:

But that was small potatoes compared to what Microsoft lost on the Surface the previous fiscal year. Using Microsoft’s stated revenue of $853 million and some arithmetic to backtrack to the FY2013 cost of revenue, Computerworld concluded that the cost of revenue for the 12 months starting July 1, 2012, was $1.902 billion. 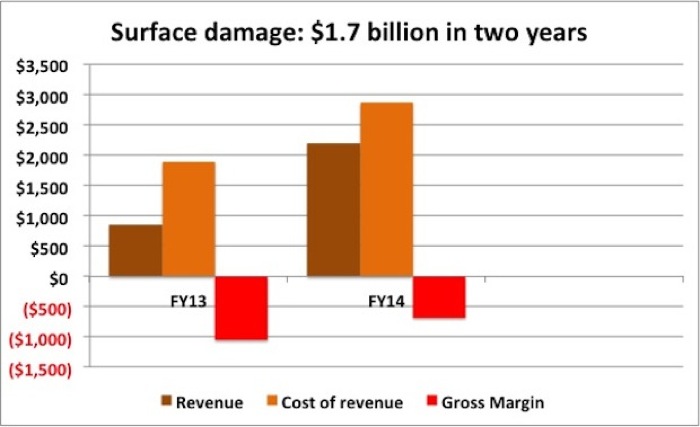 That chart is pretty painful to look at.

Last year, Microsoft took a $900 million write down on their failed Surface RT, which the company used to target Apple’s iPad.

Despite Microsoft taking jabs at the iPad, the company released Office for iPad apps back in March, which quickly topped 12 million downloads. This May, Microsoft unveiled the 12-inch Surface Pro 3 to target the MacBook Air.

Microsoft is just being Microsoft. At least they still have this cool Surface ad to brag about, right? Right?