According to adoption numbers released by Chitika, OS X Yosemite has been installed on approximately 12.8 percent of Macs in North America just one week after being made available to the public.

In comparison, one week after OS X Mavericks launched it was installed on 12.4 percent of Macs in North America. The search-targeted advertising company also noted that adoption numbers for OS X Yosemite by developers and beta testers increased substantially over adoption numbers for Mavericks.

“The day OS X Yosemite was released, more than 1% of total North American Mac OS X-based Web traffic was already being generated by users of the new version. This is more than double the North American adoption rate of Mavericks or Mountain Lion going into their respective release dates. However, that advantage was relatively short lived, with both OS X Yosemite and Mavericks posting remarkably similar adoption rates by the end of their respective first post-launch weeks. Yosemite’s slightly stronger rate of adoption could be considered more impressive based on the 5.5 million Macs sold by Apple over the past several months, a sizable percentage of which were likely purchased within North America.” 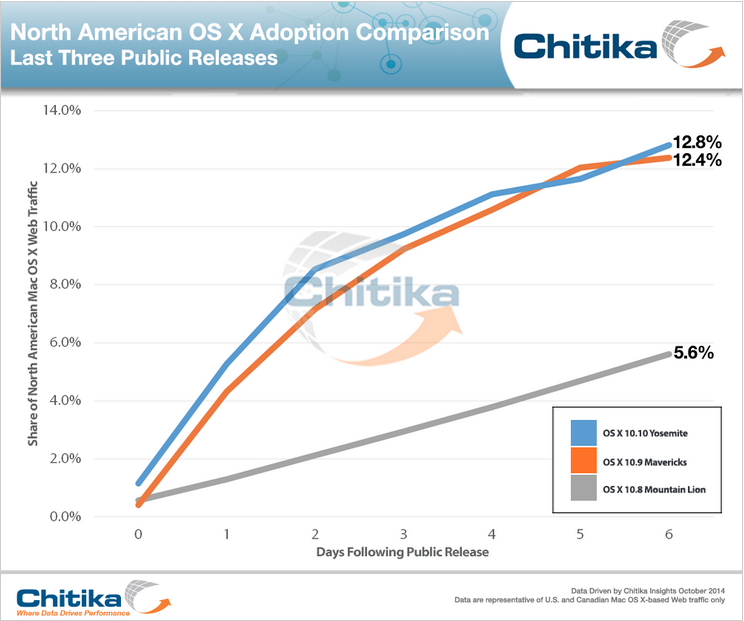 Chitika’s numbers come from millions of OS X based online ad impressions in North America. The numbers above were collected by measuring ad impressions from October 16 to October 22.

The most noticeable change in Yosemite is the introduction of a flatter and more modern design. Besides the change in the operating system’s design, Yosemite packs many features that make it more powerful and easier to use.

Yosemite also brings a new Notification Center, giving users more information and adding the ability to install widgets. Spotlight has also been redesigned with a user interface that appears front and centre, and the app now searches multiple sources like the App Store, iTunes Store, Maps, and Wikipedia.

The most interesting features of Yosemite are continuity and handoff. Users can now receive calls and send SMS messages directly from their Mac. If you start an email on your iPhone you can now pick up right where you left off on your Mac and vice versa.

Apple released OS X Yosemite on October 16 and it is available as a free download from the Mac App Store. The latest update brings an all-new design and is compatible with all Macs that were able to run Mountain Lion (10.8) and Mavericks (10.9).