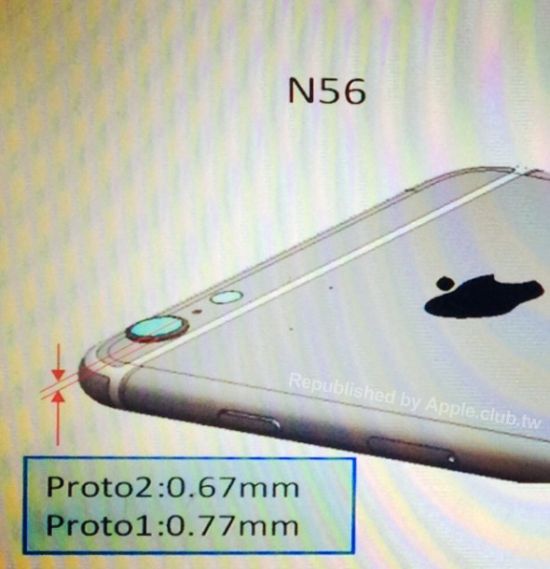 When the first snapshot of the so-called iPhone 6 emerged from China through Weibo, many of us questioned its authenticity, since it was showing an iPod Touch-style protruding camera lens and no dual-LED True Tone flash. Today another questionable schematic leak seems to corroborate that previous rumour, suggesting the iPhone 6 camera lens will protrude only up to 0.77 mm.

The schematic allegedly shows the 4.7-inch version of the next-generation iPhone, although previous reports claimed this would be a feature of the bigger, 5.5-inch model, due to its thinness. As you can see, the above image, leaked by apple.club.tw, highlights the thickest part of the iPhone 6, the camera, which will extend the 7 mm case by 0.77 mm (via GforGames).

Furthermore, the report claims the 4.7-inch iPhone 6 is codenamed N56 (as seen on the image), and the 5.5-inch model, N61, although there is no evidence to confirm this information.

The alleged schematics suggest Apple will likely opt for a round flash with the iPhone 6, which is in line with previous leaks.

As with every sketchy rumour, this one has to be taken with a grain of salt. We will find out what Apple has been working on in its labs in September, when the company is expected to unveil the next-generation iPhone.

Quora has just opened public access to its AI chatbot ‘Poe,’ which lets people ask questions, get instant answers, and have back-and-forth conversations. Poe allows users to ask questions from a range of AI chatbots, including those from ChatGPT maker OpenAI, as well as other companies like Anthropic. Quora’s chatbot is currently available on iOS, but...
Usman Qureshi
15 mins ago

Apple has just rolled out a redesign for its official website, introducing an all-new navigation bar with fancy drop-down menus on both desktop and mobile. As spotted by Parker Ortolani, the updated drop-down bar makes it easier to navigate the website and relatively faster to get to individual product pages. All-new https://t.co/pXaoM71lcY nav bar with...
Usman Qureshi
47 mins ago