Drone videographer Duncan Sinfield uploaded his latest footage of Apple Park Wednesday. Most noticeable is a new rainbow stage right in the heart of the company headquarters. 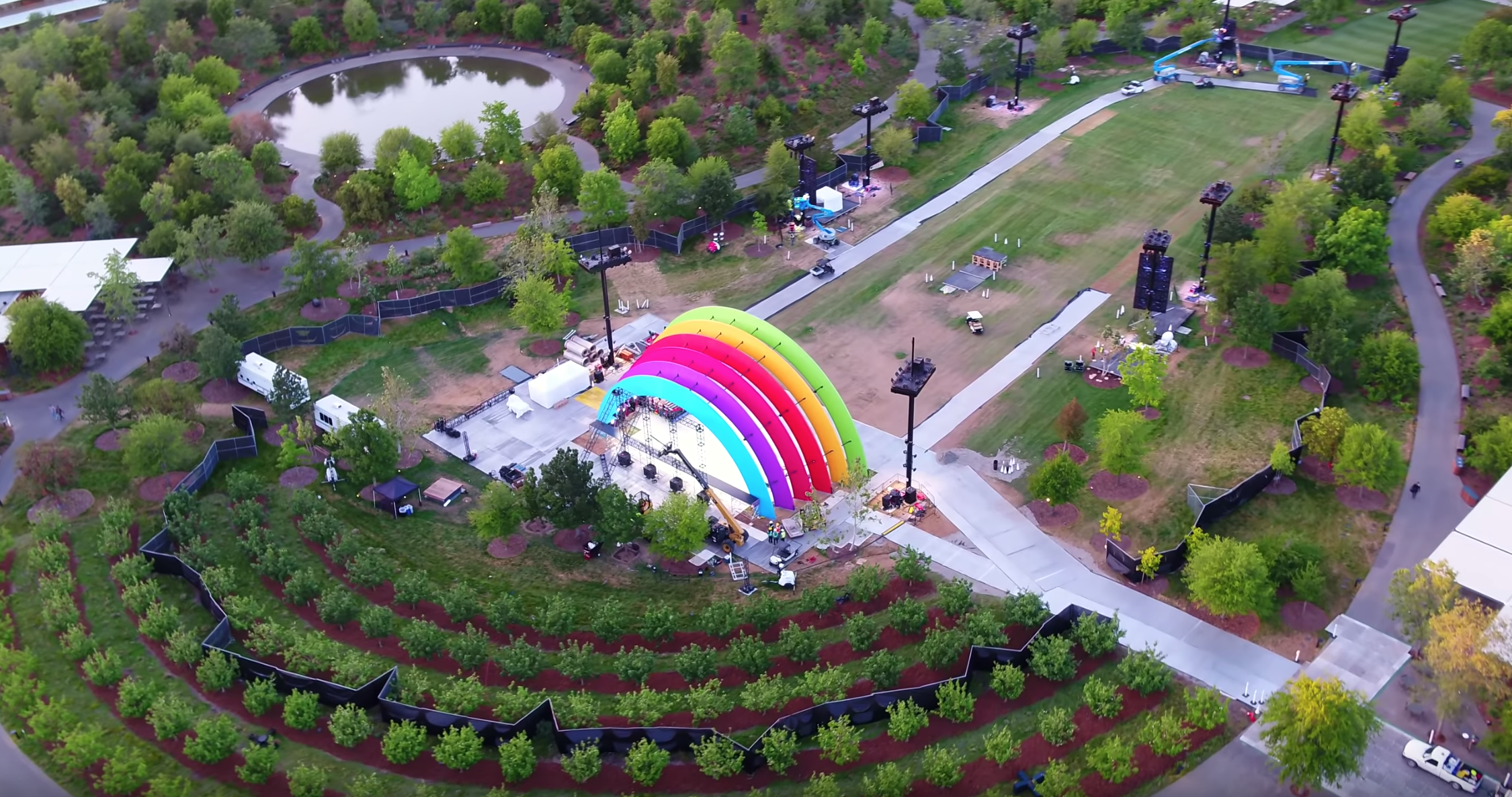 Now, according to a new report from Cult of Mac — who got ahold of an article from the company’s internal website AppleWeb — the arch, which includes all the rainbow colors of the original Mac logo, will serve as the center of a May 17 employee event to celebrate the formal opening of the Apple Park headquarters and for a tribute to late Apple co-founder Steve Jobs, who thought up the main “spaceship” headquarters building on the campus.

According to the report, the rainbow stage is the culmination of months of cooperation between groups at Apple, live event and concert rigging specialist TAIT and engineering firm Stageco. It’s reportedly built from 30 unique machined components making it easy to build and take down, but there are 25,000 parts in all including the structure itself and the metal skeleton underneath.

The multicolored arches of the stage have been reportedly designed by Apple design chief Jony Ive and his design team to “create a stage that would become immediately recognizable as the Apple Stage,” with the rainbow colours chosen because it’s “been part of [Apple’s] identify for many years.”

Mr. Ive confirmed that his team collaborated with architects Foster and Partners and designers Gainsbury and Whiting on the project. “The rainbow’s presence and optimism is keenly felt in many places and at the end of the day — it’s hard to find somebody that doesn’t love a rainbow,” he said.

“There is the resonance with the rainbow logo that’s been part of our identity for many years,” Ive explained. “The rainbow is also a positive and joyful expression of some of our inclusion values and I think that one of the primary reasons the idea resonated so immediately and so profoundly with us was the form — the connection from an aesthetic design point of view. A semi-circle relates so beautifully and naturally to the form of the ring.”

Ive designed the stage not only to be appreciated from the front, but as a three-dimensional object rather than a flat surface, allowing people to appreciate it from all angles.

“My space in Apple Park is on the external part of the perimeter,” Ive said. “But I can see the rainbow reflected in the ceiling all the way through to where I sit. That truly wasn’t planned but one of those lucky accidents. We had planned the way in which the colors interplay between the discrete bands of the rainbow throughout the day making it more vital and fluid. There are some wonderful but subtle combinations and reflections.”

At the moment, it seems like the stage will be removed following the May 17 celebration, but, considering the substantial effort and time that went into its creation, is highly likely to make a reappearance at future events.