Apple’s blockbuster second fiscal quarter wasn’t enough to maintain its position as the world’s biggest smartphone vendor, reports Strategy Analytics. The market research firm has published its latest status report on the smartphone market and noted an overall 21% annual growth during the March quarter. Total smartphone shipments reached 345 million units, which compares to 285 million units recorded during the same period a year ago.

Despite slowing smartphone sales (Samsung shipped 89 million units in Q1 of 2014 compared to “only” 83.2 million for the Q1 of 2015), the South Korean manufacturer overtook Apple during the 89 days of the first calendar quarter.

You may recall that Apple claimed the title of the world’s biggest smartphone vendor by volume in the holiday quarter of 2014, when it sold 74.5 million iPhones. Samsung’s sales showed roughly the same numbers, but let’s not forget that the OEM has multiple models targeting different markets with various price tags.

Samsung and Apple account for almost half of the total smartphone shipments. In third spot we find Lenovo-Motorola with 18.8 million units, followed by Huawei, who shipped a robust 17.7 million.

Update: Following Strategy Analytics’ estimate, Juniper Research has published its own findings: the market research firm’s conclusions are similar to that of Strategy Analytics. Juniper estimates a total of 350.9 million smartphone shipments for the same timeframe, and a year-over-year growth of over 20%.

Interestingly, Juniper estimates less than 82 million Samsung smartphone sales — the reason for the differing figures is that Samsung doesn’t report sales numbers. However, considering the recent launch of the Galaxy S6, Juniper predicts a better Samsung sales performance in the coming months.

BlackBerry continued its decline, with shipments barely reaching the 1.5 million milestone for the past quarter. Juniper Research anticipates a big quarter ahead for several vendors, however – the Apple Watch is accompanied by several flagship releases, such as Huawei’s P8, and HTC One M9 and the Xiaomi Mi5. 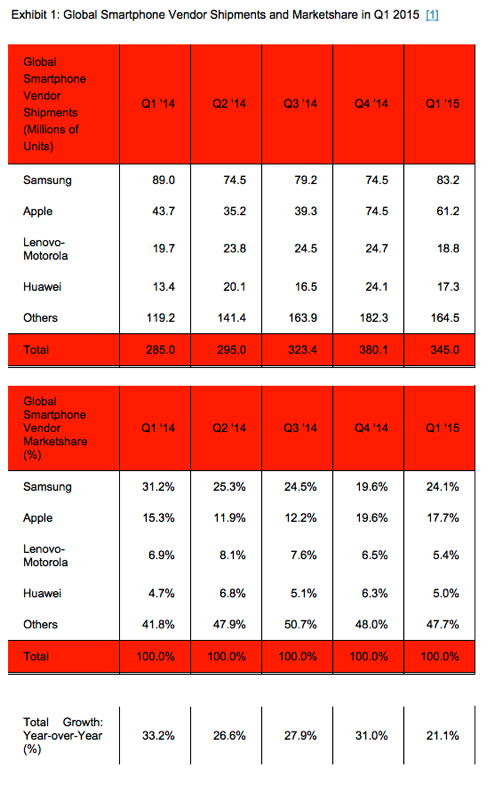