It looks like Apple is indeed planning a new version of its Smart Battery Case for the newest iPhone models. 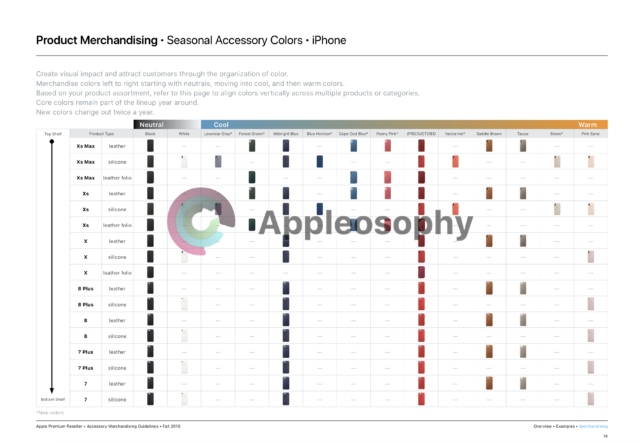 According to new images obtained by the blog Appleosophy, which were uncovered in a product merchandising guide for Apple Premium Resellers, the case shows a slightly refined design and comes in three different variations to pick from (the iPhone XS, the iPhone XS Max, and the iPhone XR, perhaps).

The reseller guidelines explain how to organize Apple’s various leather and silicone cases in stores by colour. “While the photos are low resolution, two of the cases clearly have a battery pack hump and a cutout for the vertically-aligned rear camera on the latest iPhones,” notes MacRumors.

While the images are small, the phones depicted under the “black leather” section show a case with a hump, bearing a strong resemblance to Apple’s earlier Smart Battery Case, first released in December 2015 for the iPhone 6 and 6S, but it features the vertically-arranged dual camera setup, showing it’s designed for the newer phones. Unlike other cases, Apple’s version likely uses a Lightning port for charging and displays the charge of both case and phone on the device screen when plugged in.

The documentation doesn’t have any mention of a silicone version of the Smart Battery Case, as was the original, with Apple only mentioning a black leather version of the case, which seems a bit odd, though welcome.

Apple hasn’t made its own Smart Battery Cases since 2016 for the iPhone 7 models, so we’re glad to see them back on the market. It looks as though more of the case will be taken up with a battery this time, which potentially means more battery capacity.

Additionally, it would be interesting to see if the case will support wireless charging, something Apple added to the most recent iPhone models. Furthermore, it’s also not clear if the Smart Battery case will feature fast wired charging.

While it appears Apple intended to release the Smart Battery Case during the fall 2018 timespan, fall ends this Friday, December 21. That leaves three days for the Cupertino firm to make it under the wire, but it’s more likely that any release of the new accessory would be in Winter 2019.