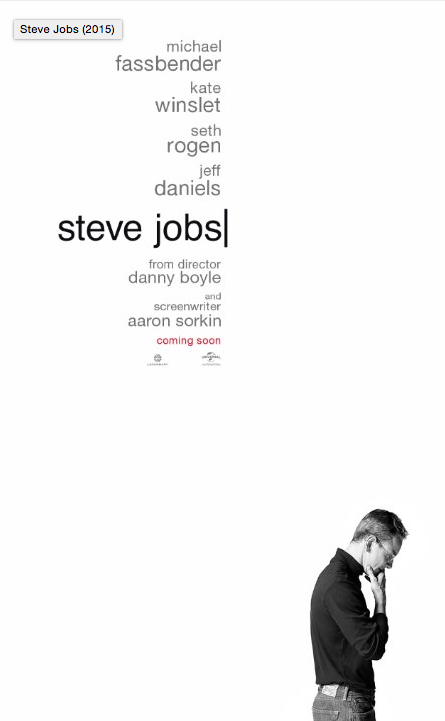 Apparently, it will be worth waiting until October 9 when Danny Boyle’s Steve Jobs biopic premieres in theatres. While the top-tier critics are keeping their opinions under wraps until the official premiere, bloggers who had the chance to see the movie screened this weekend at the 42nd Telluride Film Festival have published their reviews and agreed that what they saw was “terrific actors’ showcase and an incorrigibly entertaining ride”, to cite Justin Chang, Variety’s chief film critic’s words.

It may surprise you, but even Steve Wozniak loved the movie. In an interview with Deadline, he has only kind words, calling it “totally authentic”, as it made him feel he was “actually watching Steve Jobs and the others, not actors playing them”:

When I caught up with him Wozniak told me that, unlike the Jobs biopic with Ashton Kutcher, this one is totally authentic. “I saw a rough cut and I felt like I was actually watching Steve Jobs and the others (including Rogen’s dead-on portrayal of Wozniak), not actors playing them, I give full credit to Danny Boyle and Aaron Sorkin for getting it so right,” he enthusiastically told me. Of all the actors in the film he thinks Winslet might be the most likely to garner awards attention. I would add Fassbender to that list for sure. It’s a dazzling display of acting and he is almost never off the screen.

In this unabashedly fictionalized context, Fassbender overcomes the obvious casting hurdle (he looks nothing like Jobs, whose Arab-American lineage is briefly referenced) and delivers a performance as enthralling and fully sustained as any on his estimable resume. That the actor is onscreen at every minute makes it all the better that it’s impossible to take your eyes off him, or your ears: This is an actor who knows exactly how to toss off Sorkin’s dialogue, emphasizing rhythm and inflection over volume, while embodying confidence and authority in his every atom. It’s a performance that sets the tone for equally fine work all around: Rogen delivers a lovable, downright huggable spin on Wozniak; Stuhlbarg mines layers of wry wisdom from Hertzfeld; and as Jobs’ right-hand woman, Winslet overcomes a wobbly Polish accent to provide the audience with an essential lifeline to reason and sanity.

It’s Boyle’s best film for years, however. This is admittedly faint praise but it’s worth recognising a leap in maturity, with a stronger focus on performances over his trademark flashiness. His often distracting jukebox of song choices has also been largely replaced by mood-enhancing orchestral choices. But, like the actors, he also plays second fiddle to Sorkin’s dominating script. One wonders how Fincher would have dealt with it or whether he left the project, realising that no director could possibly compete.

Conceptually, Sorkin’s work is structured like a play, as the three roughly forty-minute sections are set backstage as Jobs, who has been invested with equal parts hubris and focus by Michael Fassbender, prepares to launch three of his major products: The Macintosh in 1984, the NeXT “Cube” in 1988 and the iMac in 1998. The same subsidiary characters swirls in and out — Jobs’ feisty and invaluable marketing executive Joanna Hoffman (Kate Winslet), tech genius and early partner Steve Wozniak (Seth Rogen), Mac software designer Andy Herzfeld (Michael Stuhlbarg), Apple chief executive John Sculley (Jeff Daniels), perennially shunned ex-girlfriend Chrisann Brennan (Katherine Waterston) and the latter’s daughter with Jobs, Lisa (Mackenzie Moss, then Perla Haney-Jardine). The actors are uniformly superb.