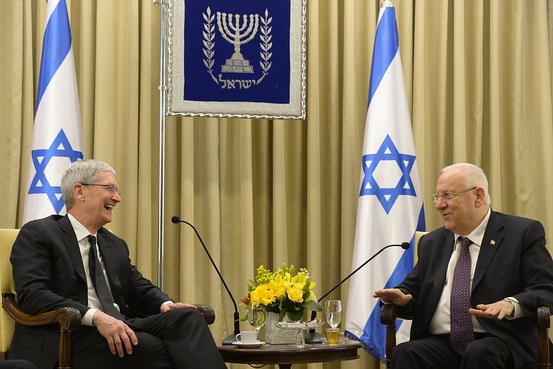 Following his visit to Germany, Apple CEO Tim Cook flew to Israel to meet with the Israeli president, Reuven Rivlin, on Wednesday. Cook’s visit to the country, however, doesn’t stop there: Its new R&D offices show the company’s increased interest in the country, which is said to be related to chip design, according to the Wall Street Journal.

“Israel and Apple have gotten much closer together over the last three years than ever before, and we see that as just the beginning,” he said in the meeting with Israeli president.

“Apple’s Israeli acquisitions and its expanding local workforce show that the company is becoming more and more independent on the chip level, where it once had to rely on external suppliers,” said Shlomo Gradman, chairman of the Israeli Semiconductor Club.

You may recall that Apple made two major acquisitions in the country: two microprocessor firms, Anobit Technologies Ltd. and PrimeSense Ltd. It is also worth noting here that Apple has hired the majority of Israeli employees of a chip-design division that Texas Instruments decided to shut down in 2013 in Ra’anana.

It isn’t just Apple, though – other international companies have also setup R&D centres in Israel, such as Facebook, IBM, HP, etc.