The 38-year old James Roy from East Vancouver, B.C., who earned fame after posting a note on the edge of his lawn titled “GET A LIFE AND STAY OUT OF MY YARD” to keep Pokémon Go players off his property, has explained that he got frustrated after dozens of people kept showing up at his garden gate hunting for something. “I had no clue. I was like there is no cat here. I thought they were looking for their cat that was lost”, he told CBC News. 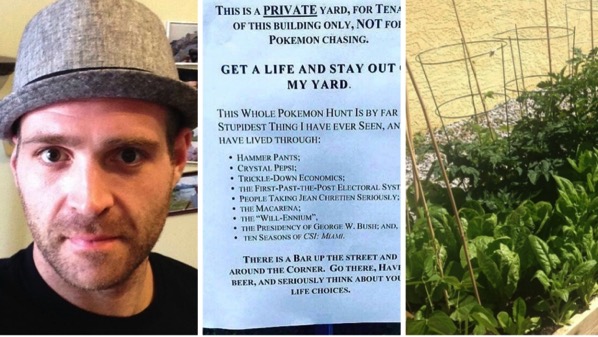 Roy’s yard was somehow tagged as a Pokemon gym, so it kept attracting players. When a group begged him to open the garden gate on Wednesday night as he was putting out the garbage, he lost patience and made up a sign to put on the edge of his property. “I just wanted people out of my garden. It’s gated and everything and we grow veggies for the whole building. .[people] stepping into my yard and trampling all over all of my kale. The garden feeds [people],” he said.

He woke up to a call from friends in eastern Canada shocked he was #1 on Reddit. So then he had to figure out — what’s Reddit? He was shocked by the reaction to his joke. “They were saying I hated autistic kids because some doctors were recommending this for therapy. And because I said have a beer at the pub, I’m now pro-alcoholism?”

Roy said he still remains shocked that Ninetendo made a game that encourages people to trespass and warns it may end up in legal battles. Roy says he’s not sure the makers really thought this through, and they seem to “plunk” the Pokemon monsters down in the most inconvenient places.

Roy also made it clear he’d never react if it was just children, but they were all grown men.