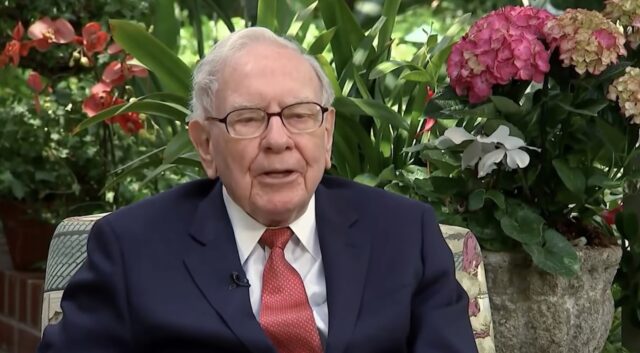 Warren Buffet’s investment firm, Berkshire Hathaway, started buying up Apple stock in 2016 and now owns over 5% of the iPhone maker, with 887,136,000 shares, according to data from FactSet.

Berkshire Hathaway’s holdings in Apple jumped to $162 billion USD earlier this month when Apple touched $3 trillion in market capitalization for the first time ever, but the company’s stock has since settled down.

Historically, the “Oracle of Omaha” has been wary of heavy-hitting tech stocks, but that has changed in recent years. Today, Apple stock accounts for more than 40% of Berkshire’s equity portfolio.

Apple issues regular dividends to its shareholders, which Buffett has said he finds attractive under his investing philosophy. For the quarter ended December 2021, Apple has reported diluted earnings per share (EPS) of $2.10 USD.

“I don’t think of Apple as a stock. I think of it as our third business,” Buffett told CNBC in 2020. The veteran investor has said Apple is “probably the best business I know in the world.”

Buffett has also said he sees Apple’s iPhone ecosystem as “sticky,” noting that it encourages customers to regularly upgrade, which makes the company a safer investment and more like a consumer company than a tech company.

Apple also appreciates Buffett’s investment in the company. “We run the company for the long term. And so the fact that we’ve got the ultimate long-term investor in the stock is incredible,” Cook told CNBC in 2019.