For those who travel or live overseas with their iPhones, having an unlocked iPhone is extremely valuable. You can freely pop in any SIM card from any worldwide GSM carrier and avoid roaming charges with Rogers. Currently, our iPhones in Canada are locked to either Rogers or Fido. If you’re not smart about it, your vacations can end up costing you a lot of money!

The first iPhone 3G unlock was yellowsn0w, released by the iPhone Dev Team. For 3.0 firmware, the Dev Team released ultrasn0w for both the iPhone 3G/3GS. However, GeoHot (who was famous for the 1.1.2 unlock) recently released purplesn0w, his own unlock for the iPhone 3G/3GS (this was to build on his release of purplera1n).

iPhone Dev Team Responds to the ultrasn0w vs purplesn0w Debate

So if you’re an iPhone 3G/3GS user, and want to unlock your iPhone, what install should you use? This can be confusing for us to decide so the iPhone Dev Team decided to clear a few things up with their recent ultrasn0w version 0.9 release.

Here are the features of ultrasn0w 0.9:

* Works on both 3G and 3GS (purplesn0w only unlocks the 3GS)
* Works on hacktivated devices
* Works regardless of how you jailbroke your device
* Doesnâ€™t patch any mach-o binary whatsoever. (Doesnâ€™t require a separate patch as each new firmware comes out).
* Doesnâ€™t install any additional daemon
* Has no race conditions, no popups about â€œMissing SIMâ€, no network issues
* Is almost 7000 times smaller than its nearest competition 🙂
* Is available now via Cydia. Source repo is http://repo666.ultrasn0w.com (that last â€œ0â€ in ultrasn0w is a zero!)

So what’s the big difference between ultrasn0w and purplesn0w? Well, the answer is that it comes down to the amount of memory being used by the respective unlocks. Ultrasn0w uses 152 bytes of your baseband RAM, while purplesn0w uses 1MB–this could lead to potential problems *now it uses zero. In the words of the iPhone Dev Team:

To put it into perspective, ultrasn0w uses 152 bytes of properly mallocâ€™d baseband RAM, which is 0.015% of what purplesn0w uses. Put another way, purplesn0w uses 6900 times more RAM than ultrasn0w (and doesnâ€™t let the O/S know that itâ€™s using it, so the O/S still thinks itâ€™s free to use. When it does use it, the baseband will crash).

At the moment it seems that both ultrasn0w and purplesn0w will do the job of unlocking your iPhone 3G/3GS (3GS only with purplesn0w). I have ultrasn0w installed on my iPhone 3GS and everything works perfectly. Personally I would stick to the iPhone Dev Team’s jailbreak/unlock tools as they have always worked for me. If you are going to use purplesn0w, do some Google research before taking the plunge.

Can the iPhone Dev Team and GeoHot look eye to eye?

In the words of GeoHot:

one of these days i’m gonna go work for apple. thats the day the dev team and i will be on different sides 😛 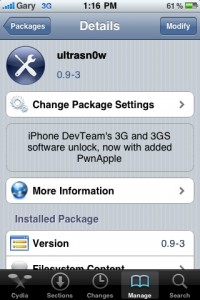 Which unlock do you have installed? ultrasn0w or purplesn0w? Any problems yet?

Texas Heart Institute researchers studying the use of Apple Watch in helping diagnose heart attack symptoms have just published their findings in the latest edition of the Texas Heart Institute Journal (via MyHealthyApple). According to the research, if the ECG function of the Apple Watch could provide a reliable analysis of myocardial infarction (MI) risk when...
Usman Qureshi
8 hours ago

Samsung VP Bryan Choi has said in an interview with The Times that the latest Galaxy Fold devices will be the company’s “secret weapons” in its fight to capture a share of the high-end mobile market. Choi said Samsung’s strategy is to make the range of foldable devices a “mainstream product, with sales equal to...
Usman Qureshi
9 hours ago