Microsoft has just announced a handful of free game titles Xbox Game Pass subscribers can look forward to during the month of November, which includes Pentiment, Football Manager 2023, Somerville, and more. 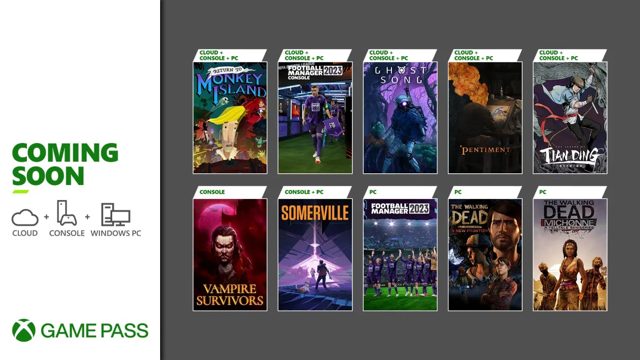 In a recent interview, Xbox chief Phil Spencer opened up about the profitability of the company’s ongoing gaming subscription service, revealing that the service makes up 15% of Microsoft’s total revenue.

And now, let’s check out all the free game downloads coming to Xbox Game Pass this month.

The Legend of Tianding (Cloud, Console, and PC) – Available Today

It is the early 20th century, and Taiwan is under the control of Imperial Japan. Play as the legendary outlaw and folk hero Liao Tianding, as you kung-fu fight your way through the colorful streets of Taipei in this sidescrolling beat-em-up.

As Javier, a young man determined to find the family taken from him, you meet a young girl who has experienced her own unimaginable loss. Her name is Clementine, and your fates are bound together in a story where every choice you make could be your last.

A Telltale Miniseries stars the iconic, blade-wielding character from Robert Kirkman’s best-selling comic books. Haunted by her past, and coping with unimaginable loss and regret, the story explores Michonne’s absence between issues #126 and #139 of the comic book.

On the desolate moon of Lorian, a long-dormant Deadsuit awakens from slumber. Journey beneath the surface on an atmospheric 2D adventure of self-discovery, ancient mysteries, and cosmic terror.

Football Manager 2023 brings you closer to the beautiful game, from the supporters that live and breathe every match to your board, scouts, players, and opposition managers. Earn the backing of the fans by outsmarting your rivals and delivering success on the pitch.

Formerly titled the Xbox edition, this tailored version of Football Manager zones in on football’s most important areas – the transfer market, the tactics board, and the pitch.

Return to Monkey Island is an unexpected, thrilling return of series creator Ron Gilbert that continues the story of the legendary adventure games The Secret of Monkey Island and Monkey Island 2: LeChuck’s Revenge.

The gothic-horror world of Vampire Survivors will throw relentless hordes of monsters at you: make the right choices, or rely on your skills and favorite weapons to turn the tide and quickly snowball against your enemies.

Walk in the footsteps of Andreas Maler, a master artist who finds himself in the middle of murders, scandals, and intrigue in the Bavarian Alps. Choose your backgrounds, impact a changing world, and see the consequences of your decisions in this narrative adventure.

In the wake of an otherworldly invasion that’s left the world in catastrophe, you must find the means to make your family whole again. Explore a rich and atmospheric world, along with the intimate repercussions of large scale conflict.