Microsoft is closing out the month of August with more free games Xbox Game Pass subscribers can look forward to very soon, such as Immortality, Tinykin, Immortals Fenyx Rising, and more. 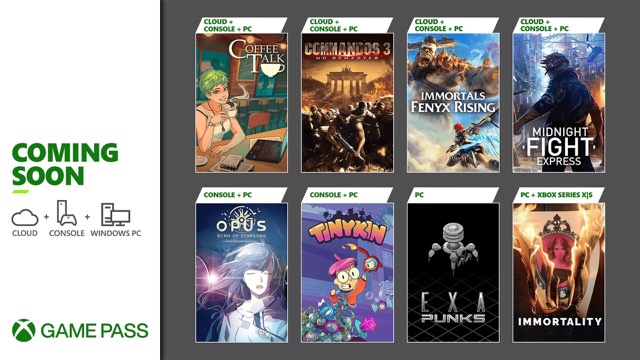 Coffee Talk is a coffee brewing and heart-to-heart talking simulator about listening to the stories of alternative-Seattle’s inhabitants. From a dramatic love story between an elf and a succubus to an alien trying to understand the lives of humans.

Engage in a brutal and hyper-kinetic brawling ballet, using every environmental tool and street fighting technique at your disposal. Level up your abilities to take down the mounting onslaught of bozos, cronies, and crime lords.

The year is 1997. You used to be a hacker, but now you have the phage. You made a deal: one hack, one dose. There’s nothing left to lose… except your life. Exapunks is the latest open-ended puzzle game from Zachtronics.

Commandos 3 – HD Remaster sends you to the relentless and unforgiving battlefields of Europe. Remastered in high definition including reworked 3D models and textures, improved controls, and refined UI.

Marissa Marcel would have been a star. She made three movies, but none of them was ever released… and then Marissa Marcel disappeared. Explore lost footage, cut your own path into the mystery, and discover what happened to Marissa Marcel.

Immortals Fenyx Rising brings grand mythological adventure to life. Play as Fenyx, a new winged demigod on a quest to save the Greek gods. The fate of the world is at stake – you are the gods’ last hope.

Team up with the mysterious tinykin and use their unique powers to create ladders, bridges, explosions, and a lot more! Find a way home through a sprawling ant-sized metropolis and unravel Earth’s biggest mystery.