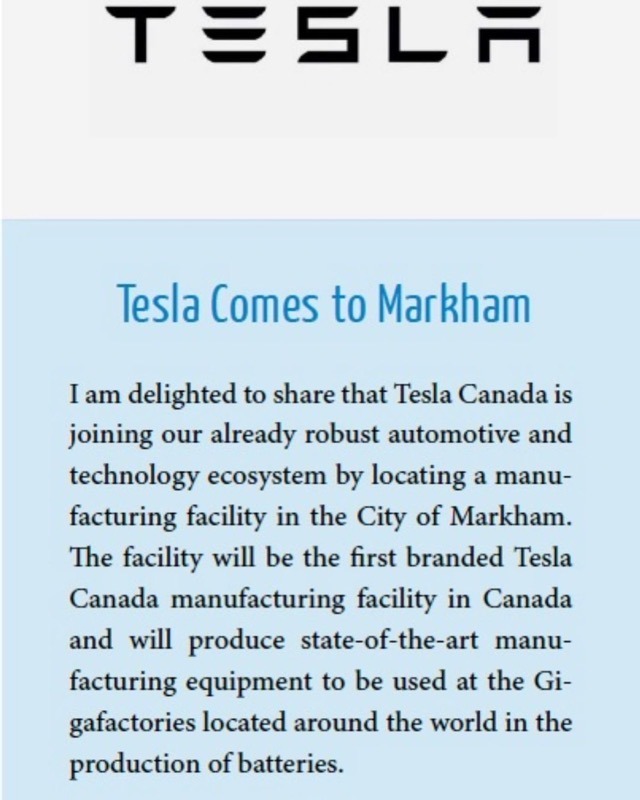 Earlier this week, Tesla Canada published a post on LinkedIn looking for Canadians to “come join our growing team in Markham”, in Ontario.

“Welcome Tesla I look forward to your official launch. You are a great addition the cluster of companies in @cityofmarkham that continue to advance the “Future Car””, said Scarpitti on Instagram.

“I am delighted to share that Tesla Canada is joining our already robust automotive and technology ecosystem by locating a manufacturing facility in the City of Markham,” announced Mayor Scarpitti.

“The facility will be the first branded Tesla Canada manufacturing facility in Canada and will produce state-of-the-art manufacturing equipment to be used at the Gigafactories located around the world in the production of batteries,” he added.

According to Mayor Scarpitti, the manufacturing facility will be situated “just south of Highway 7 west of Warden.”

Recently, Tesla raised the price of its vehicle offerings in Canada (along with the U.S.), as the company faces mounting demand, while also dealing with an ongoing semiconductor shortage and an impaired parts supply chain.

Unfortunately, the planned manufacturing facility in Canada is unlikely to drive down prices as it will be geared towards producing “machines that build the machine,” as CEO Elon Musk likes to call them, and not the cars themselves. Earlier in the year, Musk explained why Tesla pricing is higher in Canada as compared to the U.S..

Tesla’s Careers page still has no listed job openings for the planned Markham facility, but the news has driven up interest among locals seeking a position with the company.

It’ll be interesting to see what advancements Tesla makes in its manufacturing processes at this planned facility in Canada. After all, some of the electric vehicle pioneer’s biggest breakthroughs in battery technology have come from its rather small Advanced Battery Research facility in Halifax, Nova Scotia.