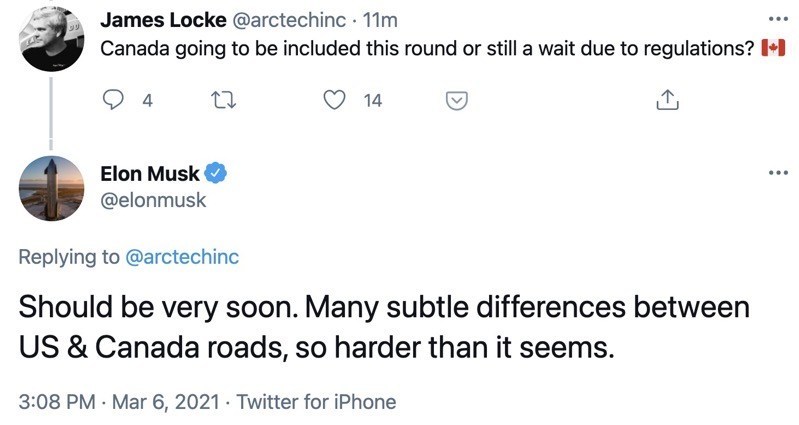 Tesla’s Autopilot software, Full-Self Driving (FSD), has been out in ‘beta’ form in the U.S. since late October.

After teasing a Canada launch as early as November, Tesla CEO Elon Musk said (again) on Saturday the long-awaited feature will be available “very soon” in this country — reports Tesla North.

Should be very soon. Many subtle differences between US & Canada roads, so harder than it seems.

In the same tweet, however, Musk goes on to say that the subtle differences between roads in the U.S. and Canada are making porting the technology over across the border “harder than it seems”.

Musk has been promising FSD beta expansion into Canada coming “very soon” since December, so it would seem that the revolutionary automaker is running into quite some trouble trying to adapt FSD for Canadian users.

Musk has also said in the past that Tesla plans on launching full-fledged Full-Self Driving subscriptions in early 2021, and it’s safe to assume that the electric vehicle giant would want to launch a beta in Canada before then.

The Tesla FSD computer started shipping in volume in Q2 2019. 2020 cars should all have FSD computers, whether or not ordered as an option.

In a reply to another tweet, Musk explained that all Tesla units produced in 2020 and beyond come with the FSD computer pre-installed regardless of whether customers opt for FSD on purchase, so they are FSD-ready off the production line and do not require the installation of an FSD computer.

The Full Self-Driving beta add-on currently is a $10,600 CAD buy, and Canadians should expect an even higher price when Tesla adds in an expected price increase, like it did in the U.S.

Now, it’s up for Tesla owners to decide if the $10,600 CAD investment for FSD is worth it in Canada when the beta makes its way here. A FSD subscription is slated to arrive in Q2 of this year, Musk said previously.