How does the size of the Tesla Model Y compare to the Model 3? A video filmed by a Tesla owner managed to capture a prototype Model Y driving in San Jose, California (along the 101N), which just so happened to be side-by-side to a friend’s Model 3.

What we have is a 3-minute video showing a prototype Model Y and how its size compares to the smaller Model 3. Footage was recorded using Tesla’s dashcam feature.

Based on the TeslaCam footage, the Model Y looks like a bigger car than the Model 3 in real life. The vehicle’s rounded roofline makes it appear much taller than its Model 3 sibling. The sloped rear is unlike traditional boxy SUVs, for the sake of aerodynamics and extending the vehicle’s range.

You can also see how the Model Y compares to an older BMW X5 at the 37-second mark of the video. 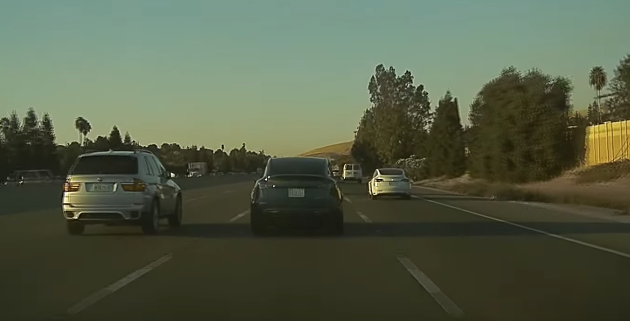 The Tesla Model Y production timeline is now ahead of schedule, set to start in 2020, according to CEO Elon Musk.

The Tesla Model Y starts at $66,390 CAD in Canada for the Rear-Wheel Drive Long Range version, and up to $84,390 for the Dual Motor All-Wheel Drive model.