Apple Watch Orders Pegged at 2.5 Million to Date in the US [Report]

Since its launch, Apple has taken 2.5 million Apple Watch orders in the US. However, there’s a catch: more than half of them were placed on the first day of “availability”, April 10th, says market research firm Slice Intelligence, as noted by Quartz.

What the market research firm says seems to be in line with an earlier projection from KGI Securities analyst Ming-Chi Kuo: Apple dropped the Watch bomb on April 10, but since then (demand) orders have been flat, at least in the US, the country Slice Intelligence tracks. 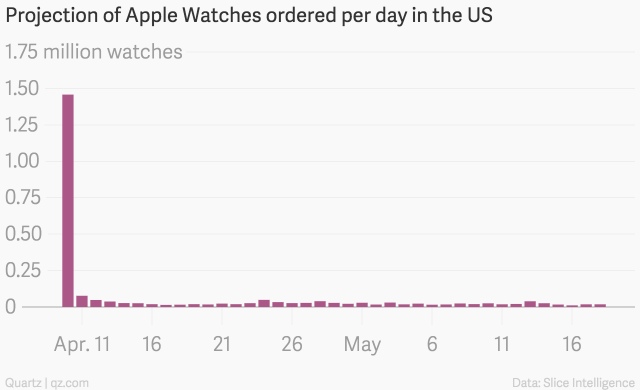 After ordering more than 1.4 million devices in one day, US orders generally remained under 30,000 units per day, says Slice. There is a spike on April 24th, when the preordered devices started arriving, but everything ‘went back to normal’ shortly afterwards.

We shouldn’t forget though, that we are talking about a first generation device, which is yet to find its niche. After using it for a couple days, I can state that it’s a neat device, and I like it, but it isn’t a must-have device. Not yet.

Another thing we should mention here: the Apple Watch is available in seven other first wave countries, but unfortunately we have no data available from them.

By the way, there are still plenty of people waiting for their Apple Watch:

Three weeks after they started shipping, most people who pre-ordered an Apple Watch have still not received one. Slice Intelligence is reporting that only 48 percent of Apple Watch pre-orders have arrived on the doorsteps of their excited owners, and an additional 3 percent of watches are currently being shipped.

The remaining 49 percent of Apple Watch customers are still waiting: 33 percent have been given no update on their delivery status. The remaining 23 percent of customers have been informed that they should mark their calendar for a delivery on May 24th, according to the shipping notifications sent to Slice Intelligence’s panel of 2 million online consumers.

The Slice report comes to “cool down” the Morgan Stanley analyst Katy Huberty forecast of 36 million units for the first 12 months of availability.