Analyst Ben Bajarin, writing for Techpinions, has noted Apple Watch user research data compiled by Wristly (over 1,100+ people on the panel), is seeing some high satisfaction rates for the new smartwatch. 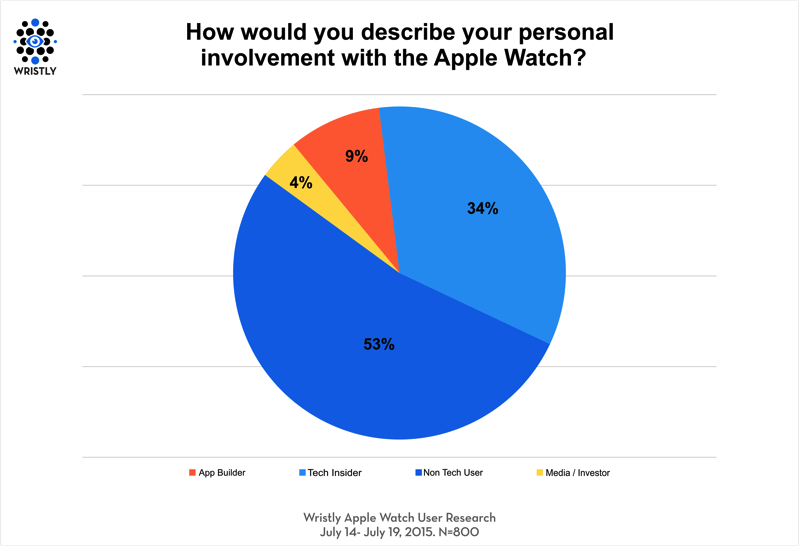 Data has revealed 53% of Apple Watch users are non-tech users, while customer satisfaction rates are at 97%, making it higher than that of the original iPhone and iPad. 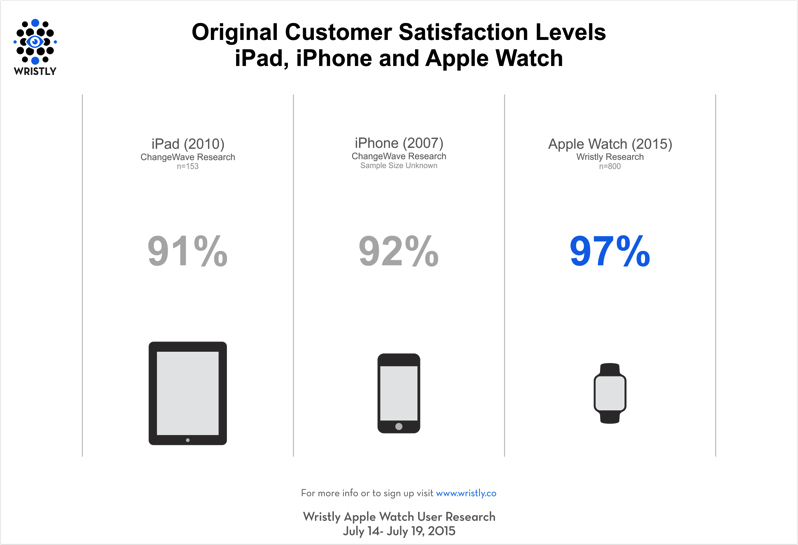 What makes this report really interesting is hearing how non-tech users of Apple Watch have responded to the device. Here’s what Bajarin notes in his observations (emphasis his):

As I listened to 14 different people tell me about their Apple Watch, I observed a pattern. Those whose job it was to think about the Apple Watch or who were early adopters who thought deeply about tech and the tech products they buy, were all much more critical of the watch. You could tell they evaluated it and thought about it deeply from every angle by their responses. Then I talked with teachers, firefighters, insurance agents, and those not in the tech industry and not hard-core techies. These groups of people couldn’t stop raving about the Apple Watch and how much they loved the product. It was almost as if the farther away people were from tech or the tech industry, the more they liked the Apple Watch.

The report also touches on the price of Apple Watch, with 73% saying it is “a good value, worth what its costs.” When it comes likes and dislikes, 80% were ‘very satisfied/delighted’ with build quality, while 10% were ‘somewhat dissatisfied’ with performance (speed/battery). When watchOS 2 is released, native apps will arrive, and should increase performance of apps significantly.

“Satisfaction is off the charts” #AppleWatch http://t.co/0U1GeQQXnW

While Apple has stated it will not reveal exact Apple Watch sales, as the device will be classified into the ‘Other’ sales category, there is already one way to possibly determine how much revenue the wearable generated.

We’ve worn our Apple Watch since the wearable’s launch and since then, one of our favourite parts of the watch are its fitness tracking (which feels overlooked by some) and battery life. Build quality is fantastic on the Sport model; we run this thing under water and it continues to survive the grubby little paws of our toddler. We almost never use apps on Apple Watch as they are too slow to load, but that should change once native apps appear with watchOS 2, coming this fall.

Apple will announce its Q3 earnings in just under an hour; some analysts expect the company to reveal iPhone sales as high as 50 million in the quarter.

The COVFIT Research Study is being conducted by the University of Toronto Dalla Lana School of Public Health, seeking to use anonymous Apple Watch activity data during the COVID-19 pandemic. “The goal of this study is to describe the impact of the COVID-19 pandemic on adult physical activity in Canada,” explains Shelby Sturrock, Epidemiology PhD […]
Gary Ng
1 month ago