You may have heard about those recent $100 off sales on Apple Watch models down in the U.S. from Best Buy and other retailers. Well, it now looks like Canada has joined in on the action, as we’re seeing Apple Watch models on sale for the first time from authorized resellers. 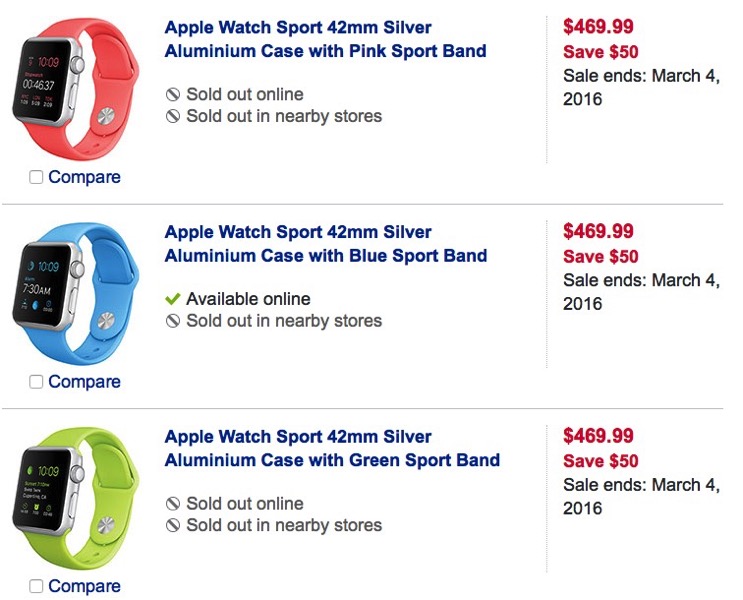 Best Buy has now discounted select Apple Watch models by $50, a sale that goes until March 4, 2016. Here’s what’s on sale, after taking $50 off (via MobileSyrup):

Of course, the popular Space Grey Apple Watch Sport you want is not on sale. Some models are showing they’re sold out online and in-stores, so it’s best to search and see what’s available in your area.

Do note Apple is expected to announce new Apple Watch bands at a rumoured special event next month, where many are also expecting the iPad Air 3 and 4-inch ‘iPhone 5se’ to debut, to be powered by the A9X and A9 chips, respectively.

If you’ve been holding off on an Apple Watch, here’s a sale that may entice you to jump on board.

I still wear my 42mm Space Grey Apple Watch Sport everyday and it’s fantastic for receiving text messages, phone calls and sending messages with Siri (when it’s working) and tracking fitness (i.e. telling me how lazy I am). Apps still load slowly though even with watchOS 2, something Apple and developers need to continue to work on.

Let us know if you’re going to pick one up!