Although Google’s Eric Schmidt is convinced Android is winning the war against iOS — and looking at the Android user base, Tim Cook has reason for concerns, especially if his strategy is to widen the iOS user base — but the picture looks different when looking at the developers’ bank accounts. 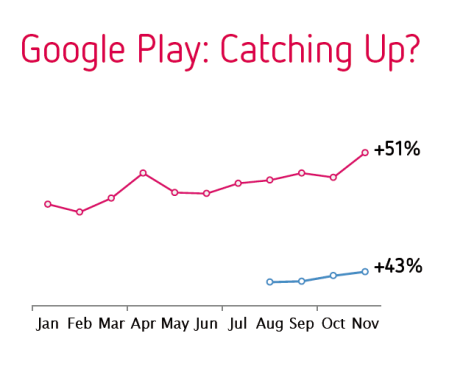 According to a recent mobile monetization report published by Distimo (Via The Next Web), which put Google Play and the App Store head-to-head, Google Play is indeed growing at a fast pace, but the App Store generates four times the revenue of the Android app store.

Looking at Google Play, its growth curve is steep: over the past four months, the combined revenue of the Play store has grown 43%, while the App Store recorded only 21% growth.

Looking back over the whole year, the App Store’s revenue has recorded a 51% growth in the 20 countries analyzed by the research company. To put it into numbers: the App Store generates an average $15 million per day, while Google Play is far below, with $3.5 million per day. 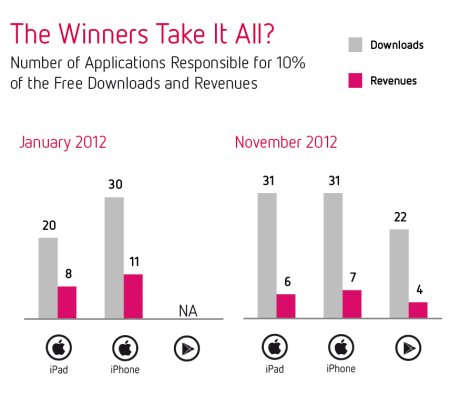 Distimo’s report completes the AppsFire analysis, saying that in-app purchases have been the driving force behind app monetization with App Store prices dropping 8% for the iPad and 16% for the iPhone as of November. Also, it’s worth mentioning that the iPad was the main driver of the revenue growth for iOS: iPad apps recorded a 71% increase in daily revenue, while the apps for iPhone saw only a 40% increase.