BlackBerry’s big rollout of the cross-platform version BBM was originally scheduled for September 21 (Android) and 22 (iOS), 2013, unfortunately, the app never made it to the general public; but did to some lucky New Zealand and Australian users, which triggered 1.1 million active users in the first 8 hours. 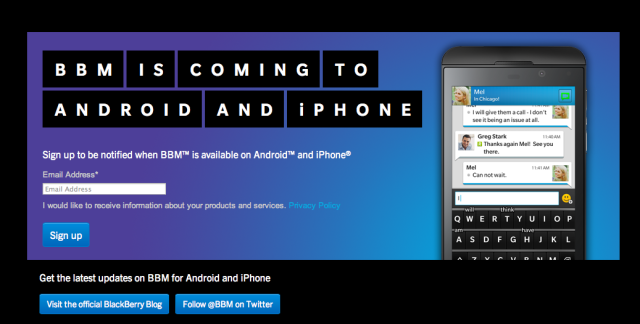 However, the once Canada’s proud tech titan — which is one step away from being acquired by Fairfax for $4.7 billion — has decided to halt the rollout, and it broke the silence only today by providing an update on the state of the postponed launch. But don’t expect an exact date though.

The official BBM account provided an update revealing that the struggling company is “Still 100% committed to bringing #BBM to Android and iPhone.”

Still 100% committed to bringing #BBM to Android and iPhone. Sign up at http://t.co/mr8J7pUDAT to know when #BBM4All

Roughly a week ago, shortly after its servers went on fire, BlackBerry said it was trying to address the problems caused by the leaked Android app, so it halted its launch plans. In addition, BlackBerry also said that it is staging a “staggered country roll-out” and still working on the iOS app.

Blackberry refrained, a week ago, from estimating the launch date, and is doing the same now. According to the official announcement, the teams are working hard to bring the app that will live up to our expectations of BBM.