Apple released iOS 6.1 to the public just a few days ago, on Monday, packing LTE support for new international LTE support and enhancing Siri, and it is already on the way to recording the fastest adoption rate ever. 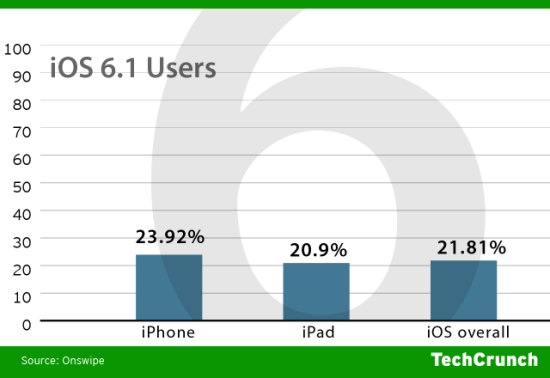 Onswipe has seen rapid adoption of iOS 6.1, with 11.35% of iDevices upgrading within the first 24 hours, and nearly 22% by 3 p.m. ET Wednesday. The creators of touch templates for Web-based content are gathering data from over 13 million monthly active users on iOS.

Just a quick comparison: When Apple released iOS 6 to the public, it took seven days to reach 44.58% of iDevices, and roughly a month to surpass the 60% milestone, while iOS 6.1 seems to be experiencing a much faster adoption rate.

Onswipe CEO Jason Baptiste says this is likely due to Apple’s OTA mechanism, as users cut the cord with the arrival of iOS 5 in October 2011. During the past 15 months, users have had enough time to get comfortable with the over-the-air mechanism.

An additional boost could be given by the upcoming iOS 6.1 jailbreak: The Evad3rs have waited for Apple to release iOS 6.1 before they push out Evasi0n, the jailbreak tool that will set all 22 iDevices free.