With less than two weeks to go until Apple’s Worldwide Developers Conference kicks off on June 2, the company has updated its WWDC application, and also confirmed that the conference will start with the usual keynote scheduled from 10 a.m. to 12 noon. 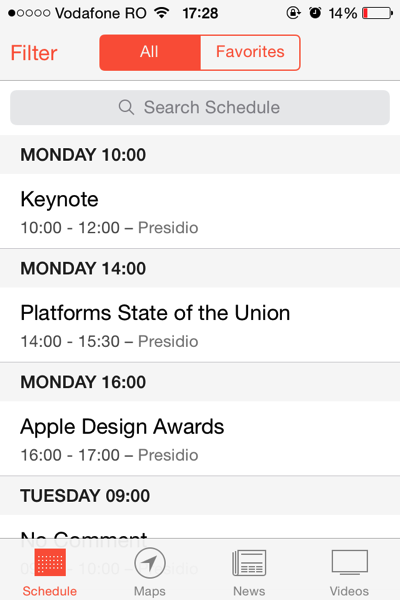 The app is a free download from the App Store and can be used by participants to browse times, locations, etc. In other words, the full schedule of the WWDC 2014. In fact, if you browse the session titles, you’ll find many entries such as “we can’t tell you yet” and the like.

The WWDC app has been redesigned since last year, but it doesn’t appear to have any significant feature updates, except, that is, for the orange theme.

This year’s WWDC will start at 10 a.m. on June 2, and Apple CEO Tim Cook is expected to lead the keynote. There are rumours about possible hardware releases, and looking back over the first four or five months of this year, the rumour mill has been busy spilling information about the iWatch, the Apple TV, and the iPhone 6, so we’ll have to wait and see what Apple presents us with this time.

An Alaskan snowmobiler who found himself in need of assistance is the first reported person to utilize Apple's Emergency SOS via Satellite service. According to Alaska State Troopers (via 9to5Mac), an adult male travelling from Noorvik to Kotzebue on a snowmobile activated the Emergency SOS via Satellite service on his iPhone. On December 1st, at...
Steve Vegvari
13 hours ago

The operating system (OS) for Apple's long-rumoured mixed reality headset is now reported to be dubbed "xrOS." This naming convention comes following reports that Apple was naming its AR/VR headset OS "RealityOS." In a report from Bloomberg, Apple's new naming convention appears to have come out of nowhere. However, the report goes on to state...
Steve Vegvari
13 hours ago