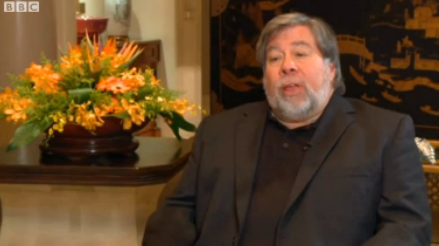 Speaking with the BBC, Steve Wozniak praised Apple’s formula to remains innovative, despite its size. He compared Apple to Microsoft, which, from his perspective, has been “resting on” the markets it built up a “long, long time ago.”

In the light of Steve Ballmer retiring from Microsoft, Wozniak thinks his period leading the company wasn’t as significant as that of Bill Gates.

This obviously leads to the next question: is Tim Cook the right person as the CEO of Apple? The investors, the market is pushing Apple to come up with something that will revolutionize the industry, but Wozniak cools the down by saying once again they need to understand that “great advances for mankind don’t happen every year.”

“Steve jobs had very strong feelings about what makes a company great, what makes products great. He more-or-less chose Tim Cook to be in that role, in that position,” Mr Wozniak told the BBC’s chief business correspondent Linda Yueh.

Woz also shared his thoughts about Samsung, Apple’s biggest competitor, which has recorded an impressive growth lately becoming the world’s No. 1 smartphone manufacturer. He says that while Apple had great products, Samsung has found its way to the emerging market, where Apple is far behind.

“Samsung had great marketing prowess,” he said. “They also had distribution channels in so many markets of the world that Apple was not in, because Apple more-or-less grew up under the Macintosh, which had a low world market share.

“You are going up against people that already have the connections, the business strategies, the business methodologies of those other parts of the world.

“It is going to be a fight for Apple and a worthy fight,” he added.

The entire video is worth watching, check it out here.