Following mobile testing in Edmonton, Calgary, Vancouver, Québec City, and Winnipeg, RootMetrics has today published the results of its first-ever test in Ottawa, revealing a tight race between the four participating players.

“Our first-ever testing of the mobile networks in Ottawa showed excellent mobile performance across the metro area,” said Julie Dey, RootMetrics vice president. “The carriers were in a close race in nearly every category. For consumers in Ottawa, this is great news. They can rely on the carriers’ fast speeds and dependable performance.” 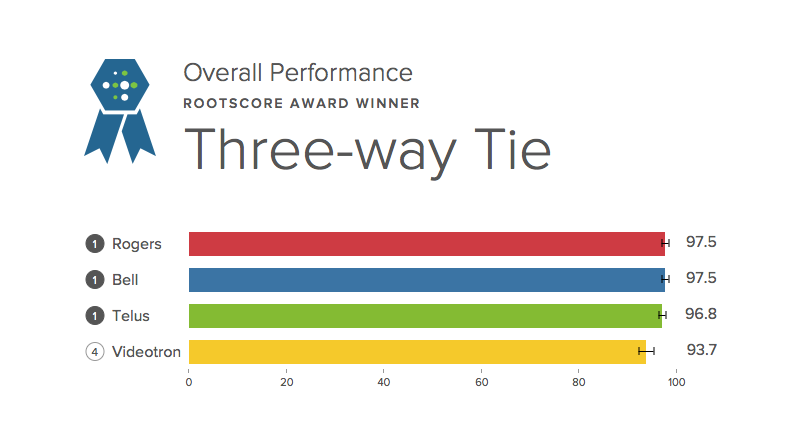 According to their tests, the best mobile networks are owned by the incumbents, with Rogers and Bell recording a slightly better overall score of 97.5 points than Telus’ 96.8 points on a 0–100 points scale. As a result, the Big 3 shared the Overall RootScore Award.

Videotron fell a bit behind, recording “only” 93.7 points, as its call performance dragged the overall score down, despite performing well in data (third), and text tests. In terms of network speed, Videotron beat out Telus, sharing the top spot with Bell and Rogers, but scored lower in network reliability tests.

To test the networks of all four players, the RootMetrics team performed 16,289 call, data, and text tests across all hours of the day and night between July 23 and July 28 at 27 locations, while driving about 1,320 km (about 820 miles).