Videotron has announced iPhone 6 pre-orders will start on September 19, while the launch will take place on September 26. Users can pre-register on this page right now to be informed when the phone will become available.

iPhone 6 & iPhone 6 Plus will be coming to Videotron on Sept 19 for pre-order & launch on Sept 26. For more details: http://t.co/eFTtgfEm9H 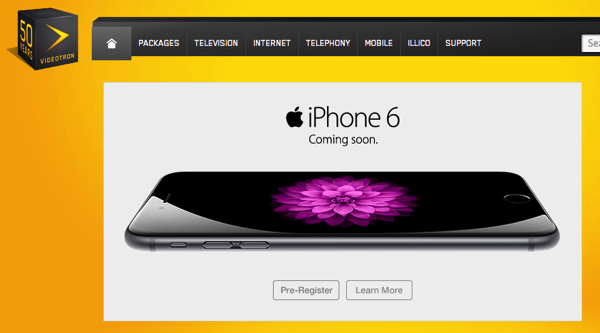 The Quebec-based carrier is a late bloomer when it comes to carrying the iPhone, as it only launched iPhone 5s and iPhone 5c sales this past March.

Typically, smaller regional carriers launch new iPhone sales after major incumbents, which we saw last year when SaskTel and MTS had their iPhone 5s launches debut as part of a second wave at the start of October.

Earlier this week Videotron’s LTE network officially went live, which means the carrier is ready to support these new iPhones.