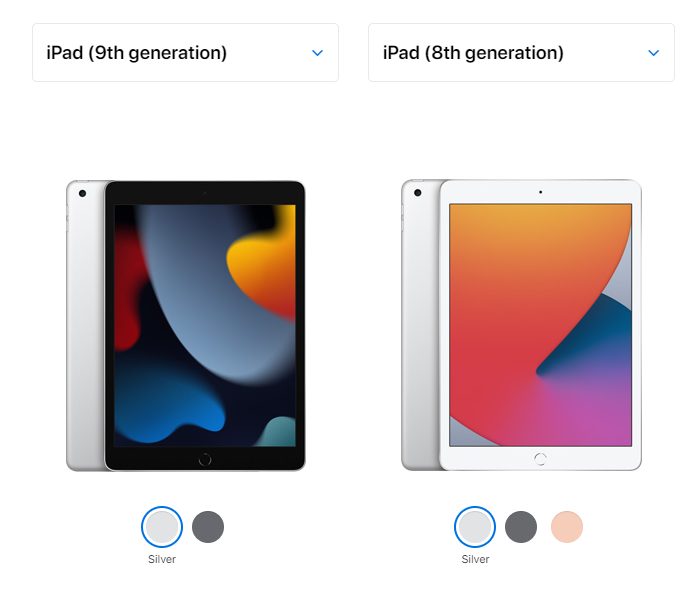 Apple’s base iPad has always been a crowd-pleaser thanks to its (relatively) affordable price tag, especially for education customers.

This year’s iPad 9 is only available in Silver and Space Gray, whereas last year’s iPad 8 also offered a Gold option in addition to the two.

Current pricing for the 8th-gen iPad isn’t available — the model was discontinued upon the announcement of this year’s model, foreshadowed by the predecessor’s dwindling stock leading up to the Tuesday event.

While both the 2021 iPad 9 and the 2020 iPad 8 feature a 10.2″ Retina display, this year’s model adds True Tone to its arsenal. Both iPads offer the same resolution, pixel density, and max brightness, but the 2021 iPad also comes with sRGB support.

The primary cameras on both iPads are pretty much the same, with similar video recording capabilities. The 2021 iPad does have the option to record 1080p video at 30 or 25 fps, although that’s not a major upgrade by any means.

The front camera is where the 2021 iPad improves the most, ditching its predecessor’s FaceTime HD camera for an all-new Ultra Wide camera capable of capturing 12 MP photos instead of just 1.2 MP ones.

The new iPad 9 sports an A13 Bionic CPU, the same one that powers the iPhone 11 lineup, under the hood. iPad 8 has a one-year older A12 Bionic chip. Both chips have been designed with desktop-class architecture, and both include dedicated Neural Engines.

Both iPads come with support for Lightning connectors, as well as Apple’s Smart Connectors.

Both the 2021 iPad 9 and the 2020 iPad 8 have Touch ID sensors built into their Home buttons. If you want Touch ID built into the power button, you’ll need the new iPad mini or an iPad Air.

Both of the iPads support Apple Pencils, but only 1st generation and above. Both devices are also compatible with Apple’s Smart Keyboard.

Connectivity depends on which variant you purchase of either iPad, but connectivity options on both models are identical. Provided you opt for the Cellular variant of either iPad, both devices support Nano-SIM and eSIM, along with Apple SIM (where available).

Both iPads have the same height, width and depth measurements, but the Wi-Fi-only version of this year’s model is 3 grams lighter than its predecessor, and the Wi-Fi + Cellular version of the 2021 iPad actually weighs 3 grams heavier.

Inspiration for the 2021 iPad comes from the current iPad Air. The 2020 iPad, on the other hand, was a product of linear updates to the iPad’s design. So this year’s iPad 9th-gen gets a fresh look compared to before.

The 2020 iPad was released in 32 GB and 128 GB variants, while this year’s iPad does away with the 32 GB variant in favour of a 64 GB variant, and the 128 GB variant for a 256 GB variant. Double the storage at the same price. If you download a lot of games or multimedia, having more storage is key.

If that’s a question you find yourself asking after Apple’s ‘California Streaming’ live event, you may have to buy the iPad 9, simply because the 2020 iPad is no longer available (at least officially).

However, if you’re stepping up from an older iPad, you have a lot to gain from the upgrade. The 2021 iPad carries a fresh new design, as well as larger capacity versions and a brand new front snapper, all for the same price its predecessor launched at last year.

Click here to learn more about the 2021 iPad on Apple.ca. Preorders for the 9th-gen iPad went live shortly after it was unveiled, with an official launch scheduled for next week on Friday, September 24.