Roundup: ‘Analysts’ Notes on the New iPads, Macs, and Mavericks 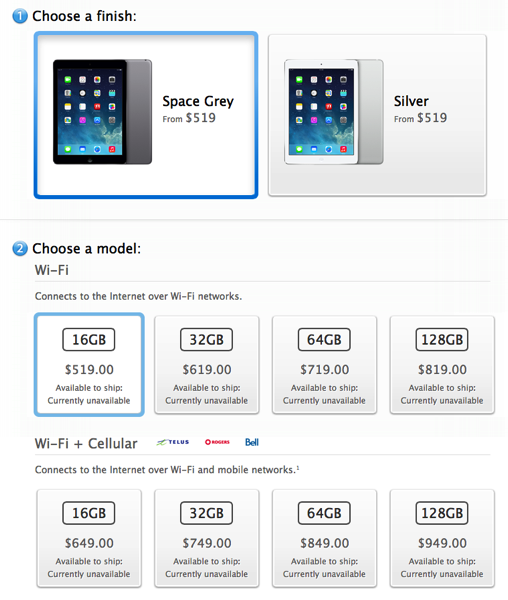 Press members present at the special Apple event held yesterday have had the chance to hold the new iPads in their hands and play with them, and the first impressions are in. But what do analysts think about the new portables, including the new Macs and Mavericks? Fortune’s Philip Elmer Dewitt has gathered some of the analyst notes they have seen. Fact is, none of the analysts have raised their price target, or lowered them.

Katy Huberty, Morgan Stanley believes the iPhone will remain the key upside driver, and the successful iPhone 5s/iOS 7  launch seems to corroborate her observations. As she notes the new iPad Air, iPad Mini with Retina display, MacBook, and Mac Pro will heavily contribute to Apple’s business, by stabilizing the remainder of the business. Also, the new iPads will help stabilize revenue growth starting in 4Q13, Huberty notes.

Apple announced shipment of its 170Mth iPad earlier this month, which aligns with our 168M cumulative shipments through the end of September. The slight C3Q13 unit growth acceleration (-7% Y/Y vs. -14% in C2Q) should continue into C4Q on the back of today’s announcement. We view our -4% Y/Y iPad unit decline estimate in C4Q13 as potentially conservative given iPad Air (20% thinner, 28% lighter) and iPad Mini will ship to 42 countries (incl. China) compared to 34 countries a year ago.”

From Gene Munster’s perspective (Piper Jaffray) the iPad updates confirm trend to stable margins. He is still confident that Apple has priced the iPhone 5C and the Retina iPad mini right, by raising the price of the latter to $399. “Apple is focused on holding its ground on price on mobile devices, which is directionally positive for gross margin, “he wrote today.

“We are currently looking for gross margins of 36.7% in CY14. Given the positive pricing trends for iPhone and iPad, which make up 75% of sales, we believe the near-term gross margin trend should be generally stable in the 36-38% range. Aside from the margin detail, we believe the new iPad gives us comfort that growth can reaccelerate in the December quarter (we are currently looking for 27% y/y unit growth from likely flat in September).”