As consumers are preparing their credit cards for their next iPad purchase, available on November 1 at 8 a.m., and analysts forecast Apple’s performance during the past quarter, Consumer Intelligence Research Partners has looked into what kind of iPads consumers bought during the calendar quarter that ended September 30. 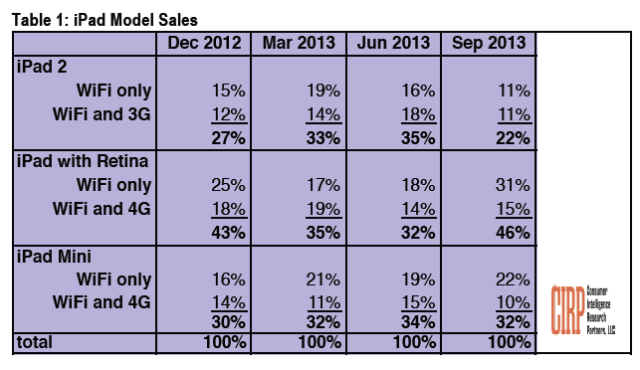 After surveying US customers who purchased iPads during the three-month period between June and September, the market research company found that the iPad 4 was the choice of 46% of new customers. While the iPad mini had its share of popularity – 32% of all sales – what’s interesting is the drop in the popularity of the iPad 2, which now stands at 22%, down from 35% recorded in June 2013.

“Despite this quarter including back-to-school sales, the iPad 2, which accounted for a third of sales for the prior six months, seems to have started to show some age, after several strong quarters,” said Josh Lowitz, Partner and Co-Founder of CIRP. “Yet, the iPad Mini continued its relative share in the past few quarters, as customers seem to continue to like it as a low-price tablet alternative.”

The study also notes that Wi-Fi-only versions of all three models (iPad 2, iPad with Retina Display and iPad mini) accounted for 64% of all sales, up from 53% recorded the previous quarter, as they are cheaper than the cellular model.

As the aforementioned trend already suggests, the models with lower storage were the most popular during the past quarter: high-end models accounted for only 13% of sales, while the entry-level iPad mini, for instance, accounted for 73% of all mini sales.

It will be interesting to see how the iPad Air and Retina display perform, and how supply constraints will affect the sale of the iPad mini.