Let’s be crystal clear about this: the untethered iOS 4.3.1 jailbreak only happened due to Stefan Esser, aka i0n1c. He discovered this untether exploit, shared his videos of it on YouTube, and the world immediately noticed. Stefan shed some details about his role in the recent release of PwnageTool and redsn0w by the iPhone Dev Team.

The Password to his AES Encrypted ZIP File Revealed

Remember when i0n1c teased a link to the actual untether files on twitter? The file was locked via AES encryption. Turns out the password to the ZIP file was “youwillneverbreakthisawesomepassword”(!). The ZIP file when first tweeted was real, but later it was a changed to an image of pineapples.

On Why He Decided Not to Release His Own Jailbreak Tool

Why didn’t i0n1c release his own jailbreak tool? He said he didn’t have time for support, and didn’t want to ‘reinvent the wheel’ when the iPhone Dev Team already had amazing tools like PwnageTool and redsn0w. The delay in releasing both tools were linked to mysterious WiFi issues, which also were present without the jailbreak.

Stefan explains that writing the XBOX 1 exploit from a while back was more challenging as he had to debug it via various coloured ‘rings of death’.

Give Credit Where Credit is Due

Props goes to i0n1c for passing his untether exploit to the iPhone Dev Team. Their collaboration has allowed the world to jailbreak their phones again.

People have asked to donate to i0nic to support his work. You can ‘donate’ to sesser@php.net via this link here.

Now, excuse me while I find out if there is an acutal image of pineapples or not in that ZIP file… 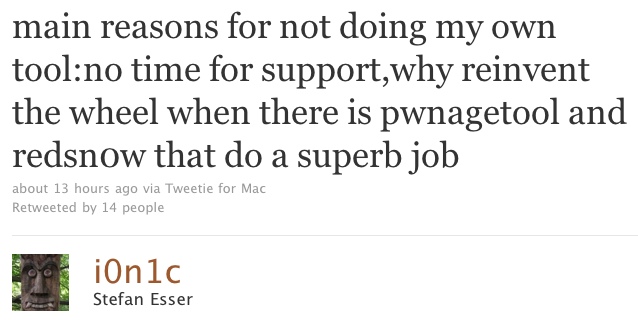