We’ve heard several rumours regarding the possible tech specs of the iPhone 6, which come from unverified sources. Those reports claimed the iPhone 6 would sport 1GB of RAM and an A8 chip clocked at 2GHz. But that’s just a fraction of the information leaked by a Chinese site.

PCHome claims to have obtained the full technical specifications of the handset Apple will unveil next Tuesday. According to this page, the iPhone 6 will measure at 138.14 x 66.97 x 6.9 mm with a 1334 x 750 pixel, 326 ppi display. What’s new comes next: The 4.7-inch iPhone 6 will be powered by Apple’s quad-core A8 chip, clocked at 2GHz, and will have an incredible 2GB of RAM (previously hinted for the iPad Air 2). 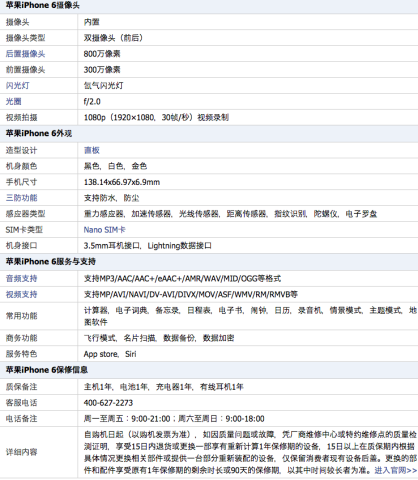 Interestingly, the iPhone 6 will have a 2100mAh battery — earlier rumours talked about a 1810mAh battery — and will have an 8MP rear-facing (f/2.0 aperture) and a 3MP front-facing camera, alongside the redesigned round Xenon flash.

According to the Chinese site, the iPhone 6 will be dust- and waterproof. Actually, this rumour was backed at a certain level by a recent set of images, coming from Feld & Volk, showing a protective mesh for the speaker and microphone holes.

In less than four days, Apple will unveil its next-generation iPhone. That will be the moment of truth: Tons of sketchy rumours will be officially confirmed or denied. Don’t expect Apple to put a major emphasis on tech specs, though: The company has historically mentioned just a handful of technical details of the hardware as they focus on user experience.