The guys from Feld & Volk have previously leaked images of the alleged iPhone 6. Now they are back in force with a new set of images showing yet unreleased components of the forthcoming iPhone 6 (4.7-inch version) and other morsels we are likely to see fully unveiled on September 9 (via MacRumors).

The first image shows the iPhone 6’s rear camera being compared to the one from the currently available iPhone 5s. While the new component seems thinner, but larger than the iPhone 5s camera, the rumour mill claims Apple may opt for protrusion, as we’ve seen in previous leaks. 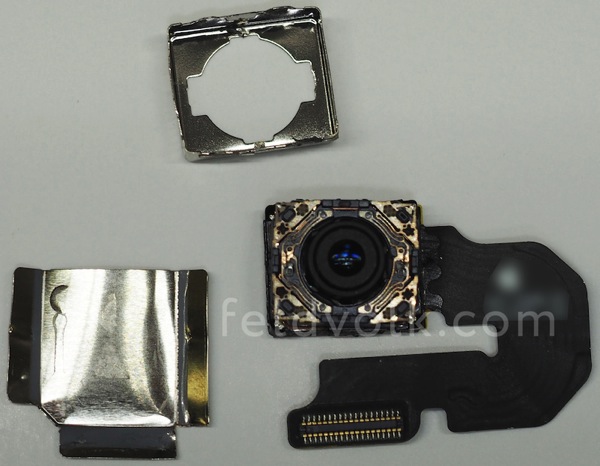 As the guys from Feld & Volk observe, the camera apparently incorporates OIS (optical image stabilization), reinforcing rumours of such a feature. Now this seems to be confirmed for the iPhablet.

What’s interesting is that Apple will use two different camera modules for the 4.7-inch and 5.5-inch version iPhones, corroborating earlier rumours of differentiation factors between the two models.

Alongside the camera module, Feld & Volk also captured other components, like the protective mesh for the speaker and microphone holes, which, in conjunction with the rubber seen on the iPhone 6 power button, suggests that the next generation iPhones may be dustproof and possibly even water resistant devices.

Update: We reached out to Feld & Volk for clarification on the camera module above, and they responded it is not for 5.5-inch model, but rather the 4.7-inch, as they stated “No we have only iPhone 6 4.7 camera module.”