Earlier this week American Express posted on their Facebook page Apple Pay in Canada was “coming soon”, and now the company’s website is teasing “stay tuned for more information in the coming weeks”, as you can see below, hinting the mobile wallet may launch in late November or early December. 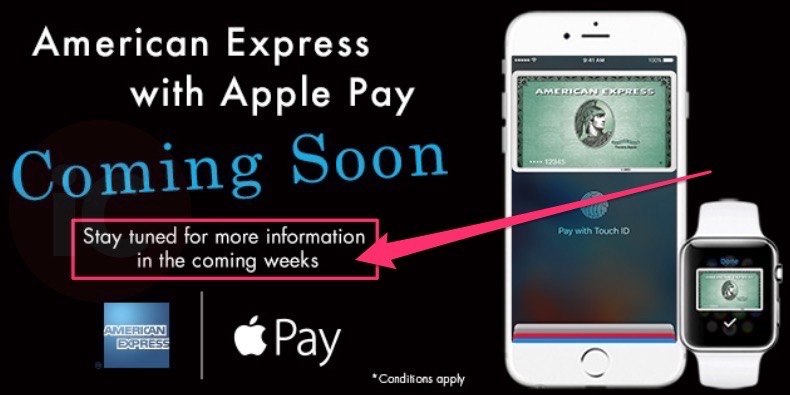 As for which American Express cards are eligible for Apple Pay? The company notes any card issued by Amex Bank of Canada will work (sounds like those with a Scotiabank Amex are out of luck):

It appears the Apple Pay link with American Express has caused a spike in interest for the credit card company, as the latter’s iPhone app downloads have surged to the top charts within the App Store.

Apple Pay will work on the iPhone 6 and iPhone 6 Plus or newer, or an Apple Watch paired with an iPhone 5 or newer. Those with and iPad Air 2 or iPad mini 3 or newer will be able to use Apple Pay for in-app payments.

Apple CEO Tim Cook earlier this month announced Apple Pay expansion into Canada with American Express would arrive before the end of 2015. The Wall Street Journal had previously reported Apple Pay would launch in Canada possibly sometime in November, a timeline echoed by our own sources.