Fiat Chrysler Automobiles (FCA), the company behind Chrysler, Dodge and Jeep cars, has today announced a new version of its Uconnect infotainment system with support for Apple’s CarPlay along with other new features, at the 2016 Consumer Electronics Show (CES) in Las Vegas (via CNET). “The Uconnect team is evolving Uconnect and making it even better,” said Joni Christensen, Head of Uconnect Marketing, FCA US LLC. 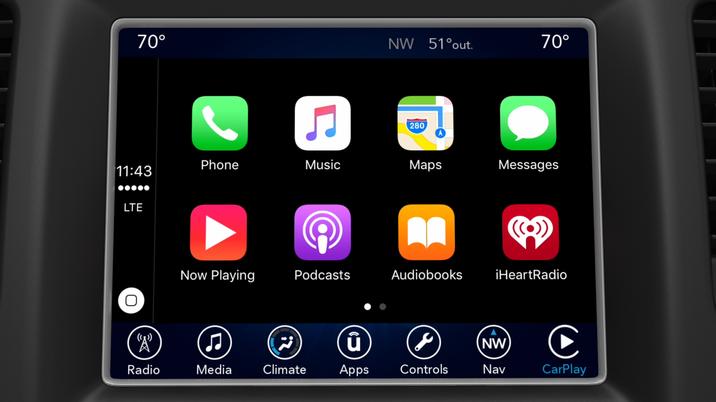 FCA has said that in 2016, it will introduce a portfolio of Uconnect systems that include capacitive touchscreens, performance improvements of faster startup time, vivid touchscreens with improved resolution and brightness, the Uconnect 8.4 NAV system, and full support for Apple CarPlay. With these new features, iPhone users will be able to plug their handsets into the car, making use of their phone’s navigation, texting and other apps, through Siri and touch commands.

“With the launch of the fourth generation of Uconnect systems, we are continuing to minimize the everyday stresses of busy lifestyles by providing drivers with a variety of ways to stay conveniently connected to their vehicles, while making every drive exceptionally informative, entertaining and unique.”

Apple CarPlay provides drivers with a smarter, safer way to use an iPhone inside a car. Apple CarPlay seamlessly integrates an iPhone with the car’s built-in display and controls in addition to featuring Siri voice control. Now drivers can make phone calls, access music, send and receive messages, get directions optimized for traffic conditions and more while staying focused on the road.

FCA has now joined the likes of GM, Honda, Hyundai, Audi and a growing list of automakers supporting Apple CarPlay.