It’s the day before Apple’s September special event, where many expect new iPhone models to be announced, along with a new Apple Watch Series 4, new iPad Pro models and more.

As for the event itself, Apple will again live stream it for the world on its website, but in a first for the company, the iPhone event will stream live on Twitter as well.

TechCrunch received confirmation from Apple today social media users on Twitter would be able to watch everything unfold live:

Apple confirmed the Twitter live stream to TechCrunch this morning.

Previously, Apple’s sponsored tweets on Twitter suggested the event would live stream, with the company’s wording “Join us September 12 at 10 a.m. PDT to watch the #AppleEvent live on Twitter.” Once a user favourited the tweet, Apple would then reply it would send updates on the day of the event.

Join us September 12 at 10 a.m. PDT to watch the #AppleEvent live on Twitter. Tap ❤️ below and we’ll send you updates on event day. pic.twitter.com/i9mGHTKhvu

@gary_ng Thank you. We’ll send a reminder before the #AppleEvent. pic.twitter.com/5n3YTyqDix 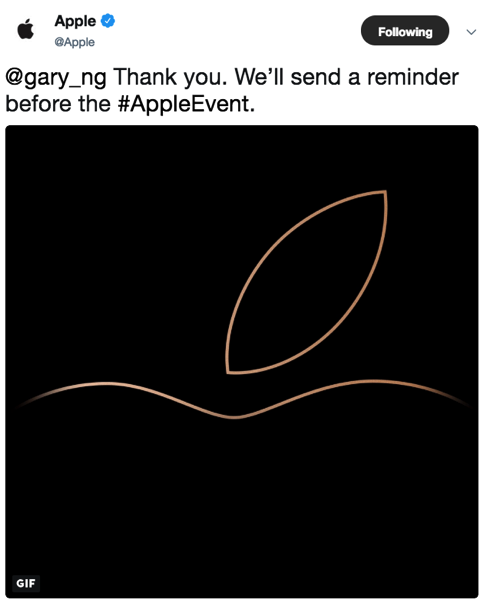 Apple’s live stream of WWDC earlier this year also expanded, allowing users on Chrome and Firefox to watch the event too, instead of just those on Safari, Apple TV or Microsoft Edge on Windows 10.

BGR first reported Apple would stream its iPhone event on Twitter this year, and now that rumour has turned out to be true.

December 1st marks World AIDS Day and Apple is continuing to support Global Fund in its worldwide fight to stop AIDS. In doing so, Apple Stores around the world are promoting (PRODUCT)RED displays and products. Additionally, Apple is promoting apps, videos, and other materials on its products to help increase visibility. Since 2006, Apple has...
Steve Vegvari
30 mins ago