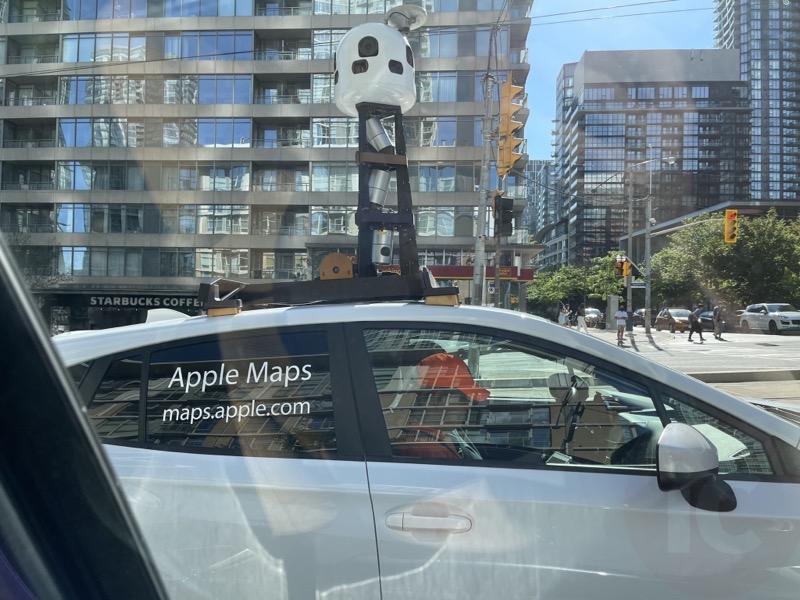 Back in the spring of 2019, a fleet of Apple Maps cars were driving across Canada to improve the iPhone maker’s mapping app. These Apple Maps vehicles had cameras mounted on top to record street imagery and more.

Apple Maps cars were seen in many Canadian cities such as Toronto at the time, and now we’re seeing vehicles from Apple back in the city, as it appears data collection isn’t done just yet.

As seen in the image above, spotted by Jesse Hollington on Saturday, he told iPhone in Canada this Apple Maps car pulled up beside him at a stoplight. The Apple Maps car was heading northbound at Spadina and Bremner Boulevard in downtown Toronto, just west of the CN Tower.

Back in December 2020, Apple debuted its all-new Apple Maps in Canada, offering more detailed views of roads, buildings, parks, airports, malls, and more. The app was rebuilt from the ground up for better navigation, a new Look Around feature (like Google Street View), curated guides and more.

While Apple Maps has improved by leaps and bounds compared to its early days, the app isn’t without its faults. Earlier this year, Apple Maps erroneously labeled Highway 401 as Highway 403 in Ontario, an error that took quite some time to fix.

With iOS 15, Apple Maps continues to bring improvements. There are now details like turn lanes, crosswalks, and bike lanes; street-level perspectives as you approach complex interchanges; and a new dedicated driving map that helps you see current incidents and traffic conditions at a glance, says Apple.

Also new are immersive walking instructions with augmented reality, but limited to iPhones with an A12 Bionic chip.

As much as Apple Maps has improved, I still like using Google Maps. I might give Apple Maps another try in iOS 15, however.