Will Apple Pay Person to Person Payments Launch in Canada?

When iOS 11 launches this fall, it will launch a new feature for Apple Pay with person to person payments, allowing users to send and receive money easily between friends and family.

Person to person payments will let iOS users send and receive money within Messages, by using debit and credit cards in Wallet via Apple Pay. When money is received, the funds go into a new Apple Pay Cash account, which the company says can be used instantly to send to someone or make purchases in a store via Apple Pay, within apps and on the web, or transfer to their bank account. 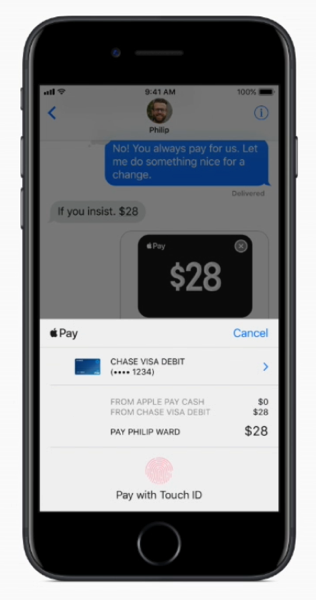 The seamless method to send money sounds like Interac e-Transfers on steroids, but will Apple Pay person to person payments support Canada when iOS 11 launches? The answer is no, sadly.

According to Apple, “Person to person payments and Apple Pay Cash will be available in the US on iPhone, iPad, and Apple Watch this fall.”

Back in April, Recode reported an ‘Apple Cash’ money transfer service was coming.

So this means the rest of the world will have to watch from the outside again, as a brand new Apple Pay feature launches in the U.S. only (Canadians are also missing out on the HomePod launch this December, which is probably good for your wallet…).

Why is this feature only launching in the U.S.? Apple most likely is testing it first at home before it expands abroad.

Scotiabank was the first to launch an iMessage extension for Interac e-Transfers in March, while RBC recently launched support to use Siri to send money.

When will Canada get Apple Pay person to person payments and Apple Pay Cash? With a U.S.-only launch, it seems we may have some time to wait.

[caption id="attachment_389637" align="aligncenter" width="1024"] Image: OpenAI[/caption] ChatGPT creator OpenAI today announced the launch of a new "classifier" designed to detect machine-written text. "We’ve trained a classifier to distinguish between text written by a human and text written by AIs from a variety of providers," the company said. While the company's AI-powered chatbot has taken the...
Nehal Malik
27 mins ago