The Apple Watch marketing plan continues as the latest magazine cover to showcase the upcoming smart watch is Flare, a Rogers Media publication, marking the first time the wearable has graced a magazine cover in Canada (via AppleInsider).

The May issue of Flare shows American actress and model Hailee Steinfeld showcasing two colours of Apple Watch Sport, in both black and white. The article on Flare describes ‘15 Things You Can Do with Your Apple Watch’, which mentions examples such as paying at Starbucks, boarding Air Canada flights, control your BMW, and more. 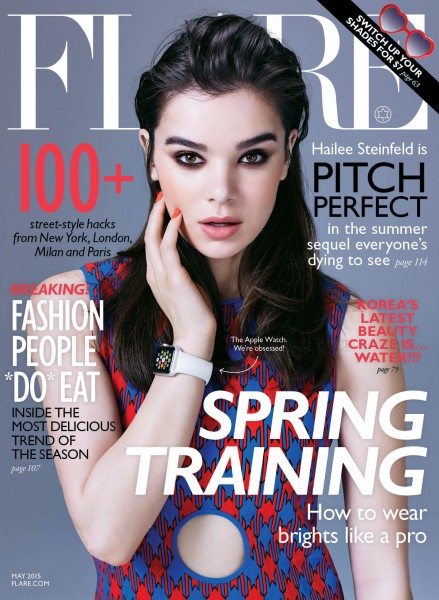 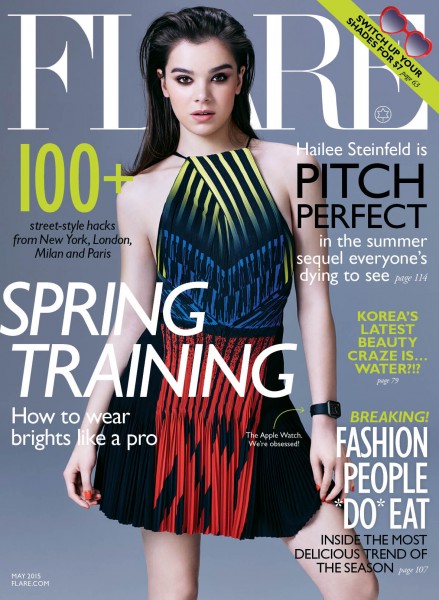 The decision to showcase Apple Watch Sport in Canada seems to be partly due to the fact our lower Canadian dollar has made the smart watch more expensive locally (starting at $449 CDN and up says Apple), which makes the Sport entry price most appealing. Also–how many Canadians will be purchasing the gold Edition, which ranges from $13,000 CDN to $22,000 CDN?

Compare this to the Vogue China debut of Apple Watch, which saw gold Edition watches being featured. As wealthy shoppers continue to rise in China, gold remains a hot commodity as a sign of wealth and is expected to see an increase in demand by 25% by 2017, after surpassing India last year.

Apple Watch has hit covers of Elle Australia, Vogue France, Chinese magazine YOHO, SELF magazine in the U.S. and Fitness. With Canada being part Apple Watch’s first launch, it’s only fitting the watch hit a magazine cover here, with the help of Rogers, a major partner for the iPhone maker.