The Apple Watch is bringing major changes to the jobs of Apple Retail Store employees: Starting April 10, they will not only be pushing sales of the usual iPhone/iPad/Mac products, but also providing personal fashion and styling advice for customers, according to employees speaking with 9to5Mac. 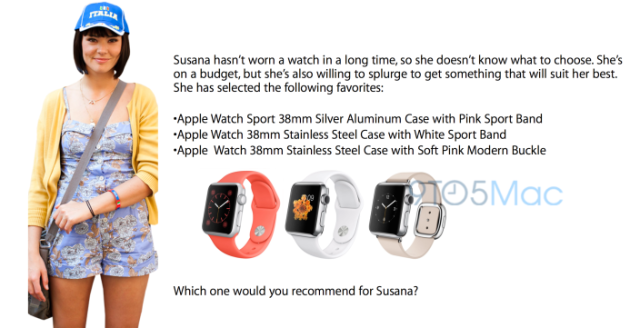 As previously detailed, the Apple Watch sales pitch relies on the retail store employees’ ability to build trust. So, in other words, in about 15 minutes – that’s the timeframe you as a customer are allowed to try on and test the Apple Watch – the employee will need to build a relationship with you that will enable him or her to serve as a fashion advisor.

The sales pitch – training materials – leaked to 9to5Mac reveal that Apple is asking employees to recommend multiple fashion and style choices, and even comment on why they think an option is a good or bad choice.