Armed Teen Robbers Wanted the iPhone 5s, Telus Dealer Only Had 1 in Stock

Earlier this week a Telus dealer Tom Harris in Vancouver was robbed at gunpoint during a brazen daytime robbery by a trio of teens. CTV News now confirms what we first told you–they were after the iPhone 5s.

According to the store, the robbers, armed with a gun and knife demanded employees to hand over the new iPhone 5s. The only problem? There was just one in stock due to overwhelming worldwide demand for the flagship model, which the robbers couldn’t believe:

Employees told Cruickshank the robbers became agitated and didn’t believe there was only one 5s, which can retail for up to $900. They tied workers’ hands behind their backs and made them open up the safe, to no avail.

“My understanding is they just didn’t believe it. They couldn’t believe how few phones were in our safe,” Cruickshank said.

The thieves left with one iPhone 5s, ten other phones, cash from the register and loose change from employees. The getaway was foiled as the teens got snarled by traffic (Renfrew and Broadway around 3:30pm? Good luck) and ditched their car, running away on foot only with two of them being caught by police, while one suspect remains at large.

Vancouver Police Const. Brian Montague says 128 cellphone robberies have taken place in Vancouver this year; despite a 16 per cent drop from 2012 the issue is still a widespread problem. 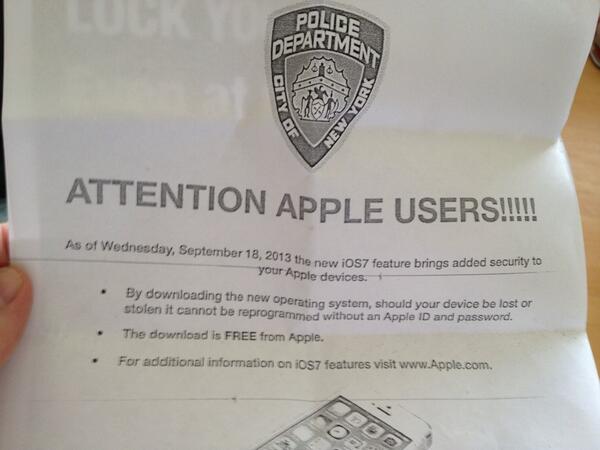 iOS 7 features Activation Lock, which requires an Apple ID login to disable Find my iPhone or to activate a new restored device (even with a DFU mode restore). This feature has resulted in the NYPD asking its citizens to update to iOS 7 to protect their devices.