Hot on the heels of rumours claiming Apple will release two bigger-screen iPhones, a few images of the alleged iPhone 6 have been leaked on Twitter. Considering that the image leak comes from Australian Sonny Dickson, who leaked images of the gold iPhone 5s before its debut, you might think the images are genuine. But we have bad news for those who thought these images might be real: their creator, Martin Hajek, confirmed these are only his renderings. 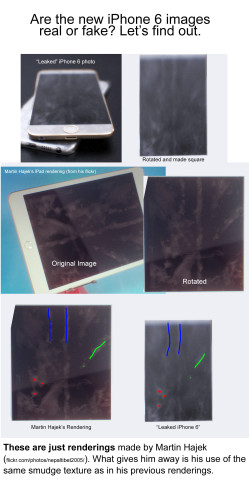 Martin Hajek confirmed with iPhoneinCanada.ca that the textures and models in these alleged iPhone 6 images are from his store, which are available online for purchase, and he noticed the details immediately.

However, Hajek denied he published the images online. Regardless, these so-called prototype images are fake, just as Gary suspected them to be the handy work of Hajek’s signature design.

It is worth noting here, though, that the first image leaks of the iPhone 5c were published at the end of January 2013, with alleged iPhone 5s rear shell leaks reaching the blogosphere a month later. The latter, however, turned out to be fake, just like the alleged iPhone 6 prototypes.

Terry Gou, the founder of Apple supplier Foxconn, was instrumental in convincing the Chinese government to ease COVID-19 restrictions in the country, which were significantly affecting iPhone production — reports The Wall Street Journal. The information comes from unnamed sources familiar with the proceedings. According to the report, Gou sent Chinese leaders a letter over...
Nehal Malik
15 mins ago