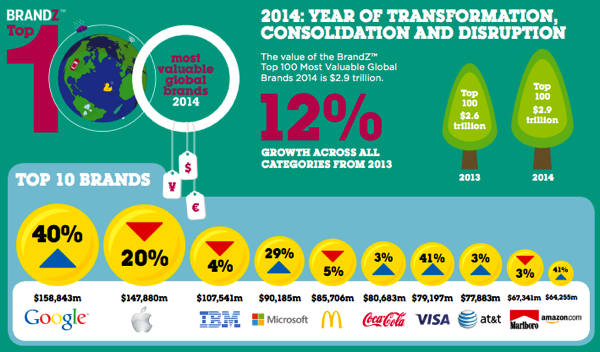 Apple’s brand value fell by 20 per cent in the past year to just under $148bn, conceding the spot it held for three years to Google, whose value increased by 40 per cent to $159, according to Millward Brown’s BrandZ Top 100 Most Valuable Global Brands ranking. 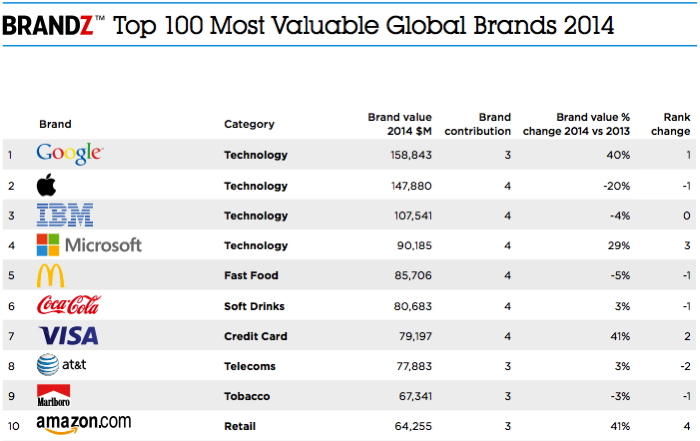 The 2014 BrandZ Top 100 report says ‘smart brands’, such as Apple, are inviting consumers to “share an experience, rather than a product”:

Apple changed the retail landscape forever to become the supreme shopper experience where people could learn, seek  help and socialize. In tandem with its aspirational product it became an iconic global brand with the  best brand retention in the industry [source: WDS]. And this engagement goes beyond the physical, with 10 percent of Internet users having talked about Apple online (GlobalWebIndex).

Just yesterday it was the celebration of 13 years of Apple retail stores.

Last year, Apple was the top brand with its value at $185 billion compared to Google’s, which was in second place at $113 billion. Brand value is determined by taking the financial value created by the corporation and multiplying it by the brand contribution, says Millward Brown.

Earlier this year, Brand Finance ranked Apple as the most valuable billion dollar brand in the U.S. and the world’s most valuable brand, while Fortune ranked the Cupertino company as the ‘most admired company’ in the world.