If taking great photos and videos is important to you, then the iPhone 8 Plus is the best smartphone that you can get right now. 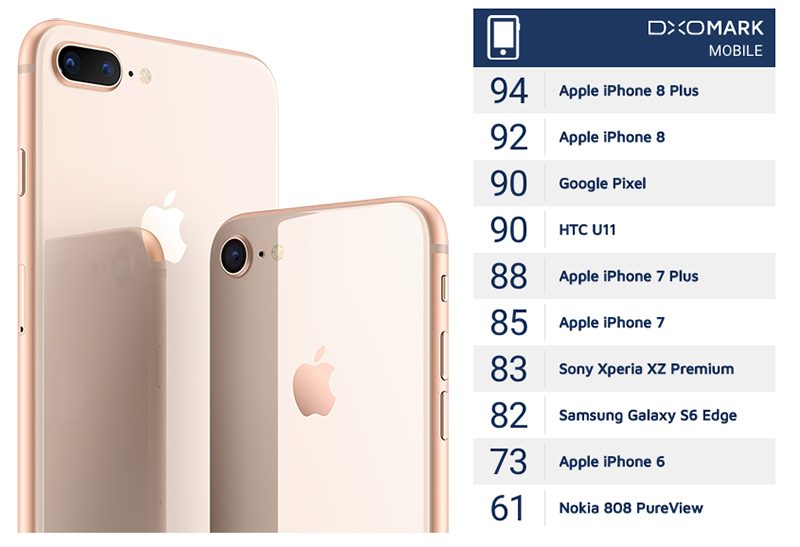 That’s according to a new report released by DxOMark, who called the camera on Apple’s iPhone 8 Plus “the best smartphone camera [they’ve] ever tested.”

The iPhone 8 Plus was heralded for “under-the-hood upgrades” giving the camera notable improvements in almost every tested category. The iPhone 8 scored 92 points, with the iPhone 8 Plus scoring 94. For comparison, the previous champion was the Google Pixel scoring 90.

Here’s the DxOMark summary: “The Apple iPhone 8 Plus is the best-performing mobile device camera we have ever tested. Its overall DxOMark Mobile score of 94 sets a new record, beating out the 90 points for both the Google Pixel and the HTC U11, as well as the 92 that its sibling iPhone 8 just scored.”

“Its Photo score of 96 is also a new record, blowing past the Pixel’s 90,” the report continues. “For Video, its score of 89 is among our highest, but tied with the HTC U11 and slightly below the Pixel’s 91. Of course, the Pixel is nearly a year old now, so it makes sense that Apple’s new flagship is breaking new ground.”

DxOMark says that many smartphones have struggled to capture HDR effectively, but the iPhone 8 and iPhone 8 Plus feature better detail preservation and overall exposure than the iPhone 7 Plus.

The iPhone 8 and iPhone 8 Plus feature 12MP primary cameras like their predecessors and the main improvements come in areas like image sensor and the signal processor. The iPhone X should ideally score even better considering its dual rear camera supports dual optical image stabilisation, which should help with low-light and zoom pictures.