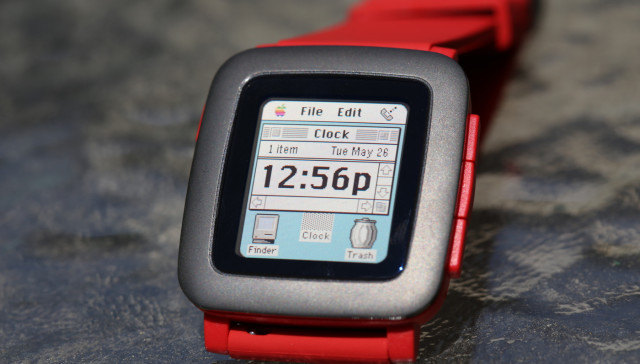 As of today, if you are a Pebble Time backer, your device will begin shipping. You may be lucky, since there are Apple Watch customers who ordered the highly anticipated device when it became available but still haven’t received it. But how does Pebble’s third-generation smartwatch stand up against the competition: Apple Watch and Android Wear devices? We’ve gathered a few thoughts from the first Pebble Time reviews that hit the Web today.

First, all reviewers seem to agree that the battery life “feels luxurious,” to use TechCrunch’s Darrell Etherington’s words. That compares to the 1.5 days of battery life I could stretch from my own 42 mm Apple Watch Sport. Secondly, it’s multi-platform, so that’s another positive feature that makes the device stand out from the crowd.

Third, there’s the design: this is what makes it unique, material choices, like the decision to skip the touchscreen and go with physical buttons (that’s somehow a no-brainer for a 1.25-inch screen, though). Not everything is to its advantage, though.

Pebble Time is a solid improvement on the original, and one that shows Pebble has earned its reputation as one of the more mature players in this space. That said, its unique design, in terms of both hardware and software, is likely to appeal to a more niche audience compared to something like the Apple Watch, specifically, and likely will please existing Pebble devotees most of all.

What the Pebble Time lacks in features, it makes up for in battery life. It still offers the core foundation of what a smartwatch once was, and for some, what it should be. I wouldn’t hesitate to recommend it to an Android user, thanks to the added functionality and notification management. I would hesitate, however, to give the same recommendation to iOS users, unless battery life and a budget (Apple’s smartwatches are almost twice as costly) are of the utmost importance.

Design quirks aside, I think Pebble has pulled off something none of the big companies exploring smartwatches have been able to do. The company understands the philosophy behind the smartwatch better than anyone else.

The Time acts as a watch first and foremost, and there are layers of “smart” stuff — apps, notifications, fitness tracking — beneath that. Pebble isn’t trying to cram the smartphone experience into a tiny screen on your wrist. It built a watch that happens to do a few other things pretty well.

In the end, despite its toy-like design — when you put it side-by-side with the Apple Watch and the LG Watch R or another Android Wear device — Pebble Time has a few aces that will make you want one. Aside from its battery life, the price is another important factor that some will consider. Actually, putting its limitations aside, Pebble Time makes a decent companion for the iPhone.

To optimize Chrome for your device’s battery and system memory, Google is introducing two new performance settings so Chrome uses up to 30% less memory and extends your battery when running low. To offer its users an improved browsing experience, Google is rolling out new Memory Saver and Energy Saver modes over the next several...
Usman Qureshi
3 hours ago