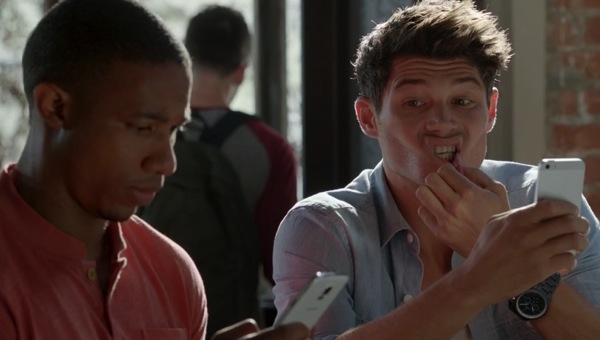 Samsung has launched a new ad targeting iPhone users who have been patiently waiting for a larger screen. The ad depicts a Galaxy S5 user next to an iPhone 5s user excited about larger screen rumours. The narrator then says the ‘awesome’ and bigger screen that’s supposedly been coming for two years is already here–in the Galaxy S5.

The Galaxy S 5’s 5.1″ HD display is the screen your friends wish they had — and now they’re lining up to watch over your shoulder.

Again, the iPhone user is made to look like hopeless simpleton. Earlier this month, Samsung launched an ad targeting iPhone users, calling them ‘wall huggers’ over the the need to keep their devices charged. A more recent ad also mocked the iPad over its lack of multitasking and lower contrast ratio.

Samsung is feeling the heat from Chinese competitors, blamed for causing the company to miss estimates in its Q2 profits, causing their mobile managers to return partial bonuses over the dismal earnings. The company’s rumoured Galaxy Alpha is set to debut this fall to battle Apple’s new iPhones.

Apple is rumoured to launch two larger iPhone 6 models this fall. Once those larger screen sizes arrive, Samsung won’t be able to mock the iPhone anymore—or will they?

Apple analyst Ming-Chi Kuo has today claimed in a series of tweets that only the highest-end 'iPhone 16 series’ model will feature a periscope camera lens next year. Earlier this month, a report by The Elec noted that the new periscope camera lens expected to debut this year exclusively in the iPhone 15 Pro Max will...
Usman Qureshi
16 mins ago

Instagram co-founders Kevin Systrom and Mike Krieger are making a return with a brand new project called ‘Artifact,' a personalized news feed driven by artificial intelligence. As noted by the Platformer, the app uses machine learning to understand your interests and will soon let you discuss those articles with friends. The company plans to let users in...
Usman Qureshi
36 mins ago